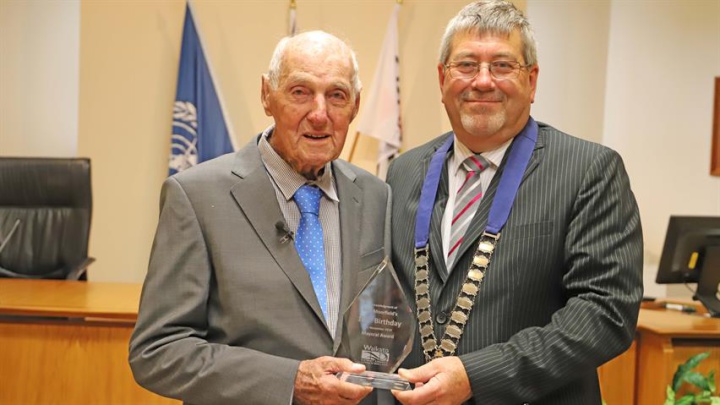 
Te Kauwhata man Bob Moorfield has been presented with a Mayoral Award in recognition of his 107th birthday.

Bob and his extended family joined Mayor Allan Sanson in Council Chambers on Monday to celebrate the joyous occasion.

As well as celebrating with birthday cake, Bob was presented with a Mayoral Award that recognises his mana in the district. Bob is well known in these parts and is the oldest living person in the district. He has lived on Moorfield Road in Te Kauwhata for 100 years.

He is now the second oldest living man in New Zealand. He is the oldest driver in New Zealand and still drives all over on a regular basis. He still lives independently in his own house, cooks his own meals and mows his own lawns.

Bob is a life member of St John and past president. He was also involved in many other clubs and committees in the district.

Mayor Allan Sanson congratulated Bob on reaching such a great milestone. “We all wish Bob a very happy birthday and just hope that we all can reach such a grand age.”