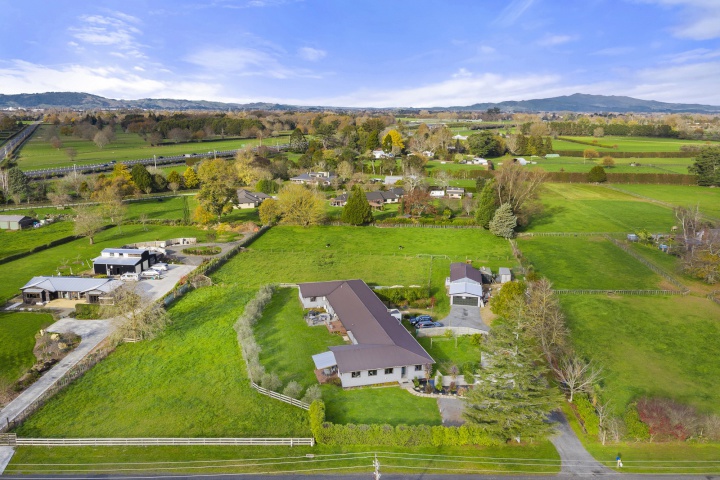 Land and buildings established to operate as a boutique commercial accommodation provider close to one of New Zealand’s foremost sporting hubs has been placed on the market for sale.

The property, known as Tamahere Guest House is located midway between Hamilton and Cambridge in the Waikato. A substantial array of sporting facilities provided at both Lake Karapiro and the Avantidrome cycling velodrome at nearby Cambridge have established the town as one of New Zealand’s premier competitive sporting destinations.

five-bedroom fully self-contained owner/manager’s accommodation facility with two bathrooms. The 460-square metre lodge with its six guest suites and the main homestead, sit on some 10,828 square metres of freehold land.

Now the freehold land and buildings at 107 Duncan Road in Tamahere are being marketed for sale by tender through Bayleys Hamilton, with tenders closing on August 6. Salespeople Rebecca Bruce, Jordan Metcalfe and Sarah Adams said there were numerous options for the property – either retaining operations in their current format, or expanding the venture.

Bruce said Tamahere Guest House could expect to be regularly booked by competitors and spectators attending the dozens of events taking place on either Lake Karapiro or at the Avantidrome – both rated among the best sporting centres of their respective codes in New Zealand.

“The sporting event calendar for Lake Karapiro is booked out solidly throughout the summer months, and is additionally well patronised over the spring and autumn shoulder periods too,” Bruce said.

“The events taking place on the lake encompass multiple fresh-water sporting codes. There’s waka ama, canoeing/kayaking, and of course rowing – all of these with events and competitions at both school and club levels, on regional, North Island and national scales.

“To cope with the tens of thousands of competitors coming into the Waipa region annually, there is a range of commercial accommodation providers operating in the Greater Cambridge region, right through to Hamilton. These range from backpacker style venues, traditional motels and hotels, and commercial operations such as Tamahere Guest House - which has the benefit of being just 15 minutes’ drive from the launching facilities for events taking place on the lake.”

Bruce said the Avantidrome indoor cycling velodrome on the outskirts of Cambridge some six kilometres away also added another dimension to the Waipa region’s sporting attractions and potential customer base for Tamahere Guest House.

“Again, like the water-based sports on the lake, the velodrome brings in competitors and supporters at both school and club levels for most of the year – and Tamahere Guest House could expect to pick up its fair share of this trade,” she said.

Metcalfe said that garaging on the Tamahere Guest House property would allow guests staying there to securely store their sporting equipment – anything from rowing skiffs and canoes through to racing bikes. The Tamahere Guest House business is being sold with a full list of operating chattels – including all furniture and manchester.

He said that in addition to the area’s high class sporting infrastructure, Hamilton also drew in large visitor numbers for one-off events such as the National Fieldays agricultural expo’ held annually at Mystery Creek – aside from this year, which was showcased online - and Balloons Over the Waikato, as well as Hobbiton at nearby Matamata.