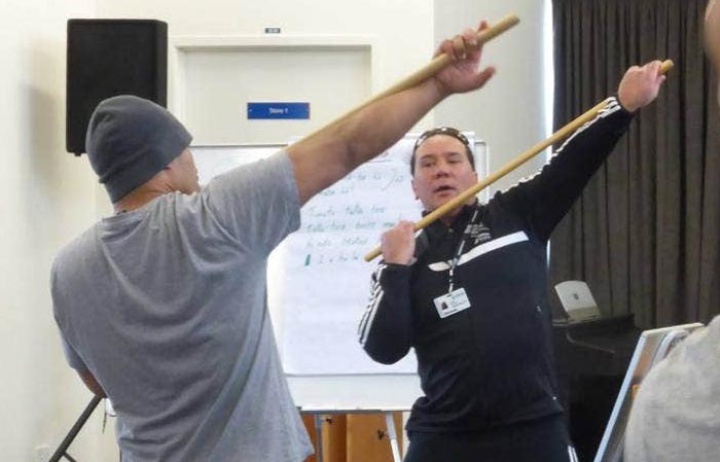 Rue-Jade Morgan initially assumed he must have done something wrong when a prison psychologist greeted him with the words “So you’re Jade!” the first time the two of them met.

“My first rule of thumb is to say ‘I didn’t do it’,” laughs Jade, who teaches a tikanga programme at Otago Corrections Facility.

But it quickly became clear he wasn’t in trouble for doing something wrong. In fact, the psychologist’s remark reflected his admiration for the many things Jade was doing right.

“He said to me that he just wanted to put a face to the name because he sees the guys in the prison all the time and they’re usually pretty antisocial, but some days they’re fizzing and filled with energy and positivity. And when he looks at their notes he sees ‘Saw Jade’ written in them.”

It’s just one of many enthusiastic endorsements for Jade’s tikanga programme, Te Hōkai Manea Tipuna (the glowing footsteps of our ancestors), which runs once a week for eight weeks and is offered four times a year. The programme has a strong emphasis on Māori weaponry and martial arts – mau rakau, mau patu and ti rakau – as well as kapa haka, waiata and whaikōrero (oratory).

Unlike most people running similar programmes, Jade has also spent time in prison. The goal, he says of his programme, is to inspire the mostly Māori participants to make positives changes in their lives, and help them to understand who they are and where they come from.

His success with Te Hōkai Manea Tipuna was recognised at Te Putanga Toi Arts Access Awards 2020 on 13 October, when he received the Māui Tikitiki ā Taranga Award for an individual who demonstrates the qualities of Māui (innovation, creativity and leadership) and provides arts programmes in a New Zealand prison that reflect cultural inclusion and diversity.

In their comments the judging panel said: “Rue-Jade Morgan epitomises the qualities of Māui. A former prisoner, he shares his life experience and self-awareness with others through his Te Hōkai Manea Tīpuna programme. The heartfelt feedback from the men in Otago Corrections Facility is testament to the tremendous value of his work, where he inspires and guides the men on their rehabilitation and reintegration journeys. An outstanding role model!”

Connecting to his culture was central to Jade’s own rehabilitation after spending time in prison during the 1990s and it seems to be working for the men who have taken part in Te Hōkai since it started in 2017. While data is still being collected, anecdotal evidence suggests that those who complete the programme are less likely to return to prison.

And if enthusiastic endorsements are a measure of Jade’s success, there are plenty of those from the men who have done the programme, which now has a long waiting list.

“Not one programme I have done in jail has ever had such an impact on me like Te Hōkai and that’s not only because of the content but Jade’s ability to connect with his students, share his life with us and inspire us to look within ourselves,” wrote one participant.

“I always look forward to having a check-in with Matua Jade and the rest of the roopu (group),” wrote another.

Both also mention how much fun the classes are. “Laughter is a huge tool in my kete,” Jade says.

Jade, who also teaches a foundation studies course at Otago Polytechnic, says the fact he has been to prison himself is central to the success of Te Hōkai Manea Tipuna.

“It means I’m able to speak straight and challenge them. I haven’t read it in a book. I’ve experienced it. I’m also able to role-model the changes I have made in my life that I believe will help them with their family dynamics.”

His previous prison experience has also been useful in his recent role as a patron for a group of trainee Corrections officers, known as Cohort 54. He was offered the role after meeting National Commissioner Rachel Leota at Te Putanga Toi Arts Access Awards 2018 ceremony, where he was highly commended for the Māui Tikitiki ā Taranga Award.

“Being a patron is about providing guidance and information and being there for any of the cohort who have a tricky question or two.”