A prostate cancer project funded by Movember has mapped ‘the cancer pathway’ for Māori men and their whānau. The findings reveal significant gaps in service provision and barriers to health that have whānau seeking help through emergency departments.

Generally, Māori men prioritise their whānau and work rather than their own health, which means they may delay visiting a doctor until they are forced to either by severe symptoms or their whānau.

Oranga Tū: A Healthy Stand is a unique kaupapa Māori research project with the aim of improving the overall health experience of Māori men and their whānau after diagnosis of prostate cancer.

A group of researchers co-led by AUT worked with community-based health services and local Māori to form co-design rōpū in Waikato and Dunedin. Altogether, they spoke to 30 managers at Māori and non-Māori community-based health services, and used a process called ‘network mapping’ to establish their locations and level of connection, or disconnection.

They also spoke to 15 Māori men with a prostate cancer diagnosis, together with their whānau, about their shared journey – looking at what community-based services they had used and whether there were ways to improve them.

“Health services need to include Māori when making decisions about service delivery. They need to be aware of the barriers that arise through colonisation and racism, and actively address those barriers for Māori within their organisations and in relation to their communities,” says Kidd. 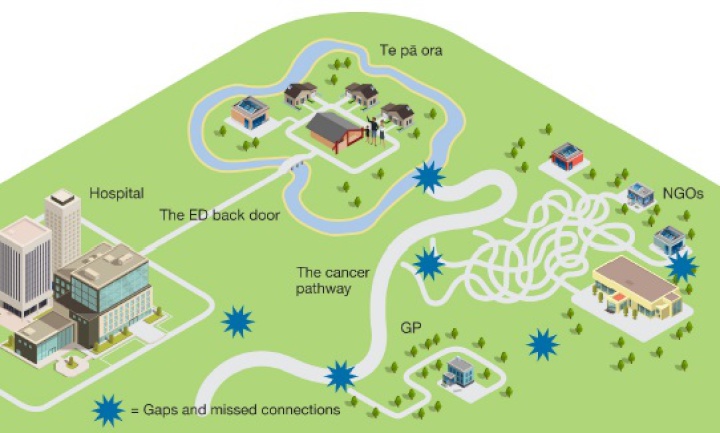 The gaps in service provision

Once whānau were on the cancer pathway, the ways to access community-based services were unclear. Conversely, there was no way for service providers to easily identify whānau in need and offer them support.

Most community-based services are non-government organisations, ranging from those that are large and well-recognised, to small and relatively unknown. Sometimes, the larger services acted as a barrier to smaller services by not sharing referrals, even when the alternative may have been exactly what whānau needed.

There were very few connections between community-based services and primary health providers. Often whānau were not referred by general practitioners because they were either unaware of these services or didn’t know how to access them for patients.

Whānau could easily access hospital care through the emergency department, but this back door access wasn’t connected with other health services so they didn’t always get follow-up care when they returned home.

Where to from here?

“Our vision is for a healthcare map for whānau, where all services are connected and whānau can see everything available to them. This includes whānau knowing how to get in the front door of all services, and services reaching out to support whānau,” says Kidd.

“There are two key things that need to happen for this vision to become a reality. The first is whanaungatanga, and the second is kaioriori.”

Closing the gaps between whānau and health services can be achieved if health services attend to the processes of whanaungatanga (connectedness) between themselves, and also between each service and the communities where whānau live.

Whanaungatanga is a process where connections between people, their whakapapa (genealogy), te taiao (natural world) and ātua (ancestors/gods) have been made and nurtured.

And kaioriori is a person who is based in the te pā ora (the safe community where whānau live) and so is whānau. Their role is to introduce whānau to the services outside the pā, stay with them while they choose which services they need, and get to know the health professionals who work there. They are an advocate, supporter, aunty, and tuākana (elder).

Robert Dunne, Movember NZ Country Manager, says: “Movember is proud to fund the Oranga Tū project. The importance of spirituality and connection to people, the land, and history have often been overlooked in this space. It is our hope that this innovative approach taken with Māori communities in Waikato and Dunedin can be applied throughout Aotearoa.”

“Education, innovation, and open discussion around prostate cancer is needed to stop Māori men from dying too young,” says Dunne.

As part of the Oranga Tū project, a cinematic short film was produced that captures the lived experience of Māori men with prostate cancer in Aotearoa, including some of the tāne who participated in this research.

The powerful 30-minute documentary, Oranga Tū, is available at TVNZ on demand as well as Māori Television. It has been shared with tertiary institutes where health professionals are trained, to help students understand the barriers to health for Māori, and will be used by the Cancer Society as part of its whānau education programme Kia Ora, E te iwi.

More than 140 Māori men are diagnosed with prostate cancer each year.

The project’s other co-leaders are Dr Richard Egan, a senior lecturer in the Department of Preventative and Social Medicine at the University of Otago, and Māori health specialist Rawiri Blundell (Ngāti Porou) at Te Awakairangi Health Network.

National: MIQ Failures Create Mayhem And Distress For Families With Visas
The Government has cruelly chosen not to fix known problems in the Managed Isolation and Quarantine (MIQ) online booking system that are keeping families from reuniting says National’s Spokesperson for Immigration, Erica Stanford... More>>