COVID-19 lockdown factors continued to heavily influence the spending patterns of Kiwi consumers in October, according to New Zealand spending data released by Worldline today – but with Auckland now set to move to Level 3 Step 2 next week when retails stores are allowed to open, the city looks poised for a deluge of pre-Christmas spending in November.

Worldline’s data shows consumers in Auckland/Northland – and now Waikato – spent well below levels recorded in October a year ago, while the rest of the country – most of which is at Level 2 – experienced a moderate sales lift amongst Core Retail merchants. Pockets of low activity remained in all regions amongst sectors both within (eg. Accommodation providers) and outside (eg. Travel companies) the Core Retail sector.

Spending in Waikato dropped sharply following the early month shift to Lockdown Level 3 for many in the region, and by the end of the month the rate of spending decline was running similar to that of Auckland/Northland. Elsewhere in New Zealand, spending generally increased during October. 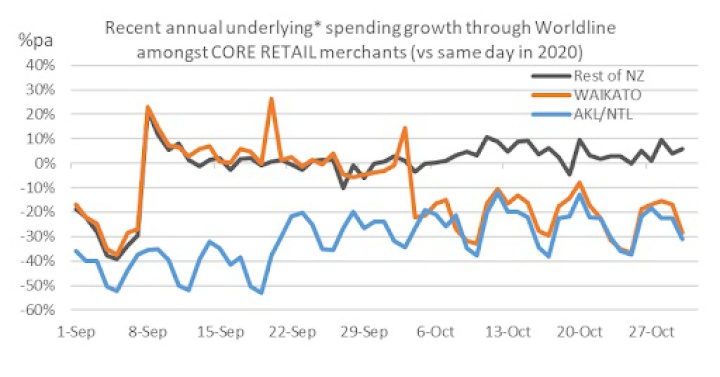 Figure 1: All Cards spending through Worldline for core retail merchants in Sep and Oct 2021 versus the days in 2020 (* Underlying change excludes large clients moving to or from Worldline)

While there is clearly a difference in rate of change, there are also interactions between the regions and sectors and the day of the week. Spending in the restricted regions during the traditional workdays was below year-ago levels (when the country was in either Level 2 or Level 1 conditions) but then fell away even sharper on weekends and Labour Day, an effect most noticeable amongst a combined group of Hardware, Furniture and Appliance merchants.

In contrast, spending on household items in the Level 2 regions increased strongly on weekdays, and was even stronger on the weekends, including Labour weekend.

Another contrast was amongst Clothing and Footwear merchants, where spending in Level 2 regions was about the same as last year (down just 1.7%), but up on Sundays, while spending on Clothing and Footwear in Auckland/Northland was down strongly every day of the week, averaging -81.2% for the month (a similar pattern was shown by Auckland/Northland Beauty and Hairdressing merchants, down 85.3%).

Worldline’s new Head of Data, George Putnam, himself an Auckland resident, says that with the region now preparing to move to an Alert Level where retail stores can open with safety measures in place, the floodgates of Auckland consumer spending are set to open wide and surge, following the trends seen in Level 2 regions.

“After nearly 80 days in lockdown, Aucklanders will no doubt have long shopping lists on their fridges – not to mention disheveled hair and fraying clothes – so will be readying to open their wallets to catch-up on nearly three months of limited spending options,” he says.

“Add to this the traditional busy lead up to Christmas across all regions, which will likely be even busier this year with restrictions easing, and we’ll typically see the volume of transactions picking up mid-November and reach an early frenzy at the end of the month during the Black Friday and Cyber Monday sales. Then there will likely be an even more intense end to pre-Christmas trading on the Thursday and Friday before Christmas Day – all of which will no doubt be a welcome change for retail businesses and consumers alike.”

Elsewhere, the remaining regions saw an uptick in spending, the annual change jumping from -5.3% in September to +3.1% in October. Annual growth amongst regional Core Retail merchants was highest in Wairarapa (+8.1%) and Canterbury (+7.6%), and was lowest in Marlborough (-1.1%), Wellington (+0.7%) and Gisborne (+0.9%) amongst the Level 2 regions.

Figure 2: All Cards NZ spending through Worldline for core retail merchants by region in October 2021 (* Underlying spending excludes large clients moving to or from Worldline)

These figures reflect general market trends and should not be taken as a proxy for Worldline‘s market share or company earnings. The figures primarily reflect transactions undertaken within stores but also include some ecommerce transactions. The figures exclude transactions through Worldline undertaken by merchants outside the Core Retail sector (as defined by Statistics NZ).

ABOUT WORLDLINE IN NEW ZEALAND

We are New Zealand's leading payments innovator. We design, build and deliver payment solutions that help Kiwi business succeed. Whether you’re looking for in store, online or mobile payment solutions or powerful business insights, Worldline is here to help with technology backed by experience. https://worldline.co.nz

Worldline [Euronext: WLN] is the European leader in the payments and transactional services industry and #4 player worldwide. With its global reach and its commitment to innovation, Worldline is the technology partner of choice for merchants, banks and third-party acquirers as well as public transport operators, government agencies and industrial companies in all sectors. Powered by over 20,000 employees in more than 50 countries, Worldline provides its clients with sustainable, trusted and secure solutions across the payment value chain, fostering their business growth wherever they are. Services offered by Worldline in the areas of Merchant Services; Terminals, Solutions & Services; Financial Services and Mobility & e-Transactional Services include domestic and cross-border commercial acquiring, both in-store and online, highly-secure payment transaction processing, a broad portfolio of payment terminals as well as e-ticketing and digital services in the industrial environment. In 2020 Worldline generated a proforma revenue of 4.8 billion euros. worldline.com