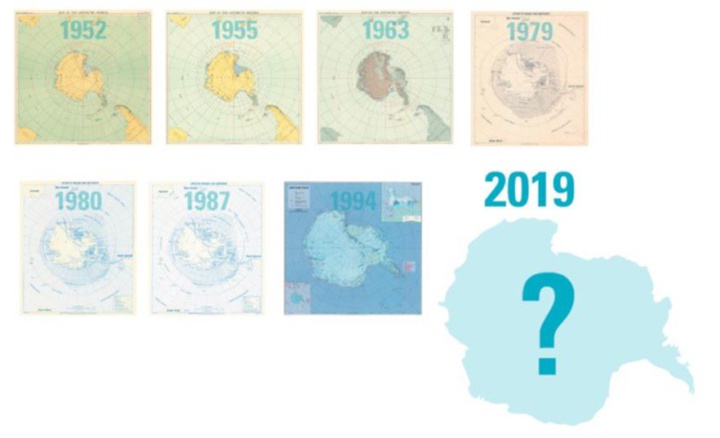 The New Zealand Antarctic Society (NZAS) with support from Land Information New Zealand (LINZ) has produced a new custom-designed wall map of Antarctica to mark the anniversary of the Antarctica Treaty on 1 December.

“Sixty years ago, in 1959, the signing of the Antarctic Treaty laid the foundation for the international science cooperation that exists today – and New Zealand has been a signatory to the Treaty right from the start” says Dr Linda Kestle, NZAS President.

Over the next week, the large printed map will be sent to all 2700 primary and secondary schools in the country. Themes on the map address climate change issues, such as the ice sheets, ocean currents, sea ice, and sea level rise.

“The NZAS have this year been working in a range of partnerships, to ensure that every school in the New Zealand will receive a copy of this brilliant new wall map of Antarctica. It will hopefully inspire and also be an educational resource for our future generations of scientists and decision makers.”

The new Antarctica wall map will be launched today, Thursday 21 November, at the National Library of New Zealand. It will be on display alongside some of its historic predecessors in a three-week long exhibition called ‘Mapping Antarctica – the frozen continent revealed’ until 12 December.

Tui Te Hau, Director Public Engagement National Library says, “We’re delighted to host this temporary exhibition that highlights how our knowledge and understanding of Antarctica has strengthened over time.”

LINZ says the map is a redesign of traditional cartographic conventions, incorporating the latest satellite technology with the most accurate elevation data. Uncertainties in the altitude of the ice sheet have been reduced to less than one metre.

“To support the NZAS schools’ initiative we wanted to present a more realistic tone and use data to demonstrate interesting features, with colours derived from aerial imagery. Tools are getting so much better, offering a wide range of techniques to employ. Therefore, we can be more complex in our designs, incorporating more and more features. Cartographers are taking advantage of this, trying to let the land speak for itself.” says Ian Reese, Senior Spatial Analyst, at LINZ.

The production and distribution of the map has been supported by several partners including Victoria University of Wellington, Otago University, Waikato University, AUT University, NIWA, GNS, NZ Sea Rise, and the Antarctic Report.

In 1959 the Antarctic Treaty was signed in Washington DC by twelve countries, including New Zealand, ensuring that Antarctica “shall continue forever to be used exclusively for peaceful purposes”. The agreement specifically promoted the freedom of scientific research on the continent.

The new Map of Antarctica can be obtained through membership of the NZ Antarctic Society at antarcticsociety.org.nz.