An investigation into the deaths of 19 fur seals on the Kaikoura coast has revealed eight were shot. The deaths of the other seals are being treated as suspicious. 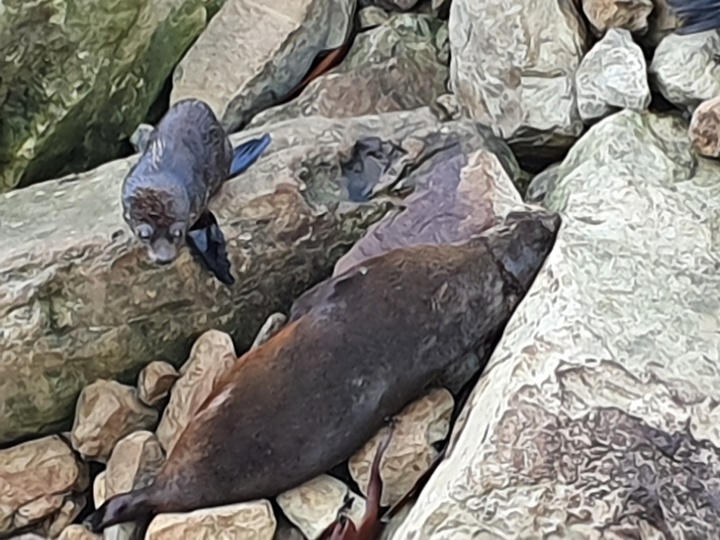 An alive seal pup beside a dead adult seal at Ōhau Point. Two distressed seal pups were seen sitting with two of six dead seals when they were found. Photo credit: DOC

Te Rūnanga o Kaikōura and the Department of Conservation (DOC) are appealing for information about the seals’ deaths and to identify who may have shot the eight seals.

Te Rūnanga o Kaikōura and DOC first appealed for information on 5 November about the deaths of five adult seals at Half Moon Bay and another six seals at Ōhau Point, north of Kaikōura township. Since then, another eight seals - one a pup - were found dead several hundred metres north of Half Moon Bay.

DOC South Marlborough Operations Manager Phil Bradfield says although the cause of death hasn’t been able to be established for 11 of the seals, the fact the seals died grouped closely together gives cause for considering all the seal deaths suspicious.

“It’s disturbing and deeply disappointing to know someone has deliberately shot and killed at least eight fur seals.

“Te Rūnanga o Kaikōura and DOC take very seriously any harm to fur seals which are a taonga and legally-protected species.

“We’re hoping people will come forward with information to help us find whoever is responsible for the heartless shooting of at least eight of the seals.”

The seals are believed to have died within the last month.

It’s not been possible to closely examine the six dead seals in the Ōhau Point Fur Seal Sanctuary because it would disturb pregnant females and young pups in the breeding colony.

Seals have been re-establishing on the Kaikōura coastline after the 2016 earthquake damaged parts of their habitat. They are a popular sight, with people driving on State Highway 1 often stopping to look at the seals, including at the Ōhau Point viewing area.

The penalties for harassing, disturbing, injuring or killing a marine mammal under the Marine Mammals Protection Act 1978 are a maximum two years’ imprisonment or a fine to a maximum of $250,000.