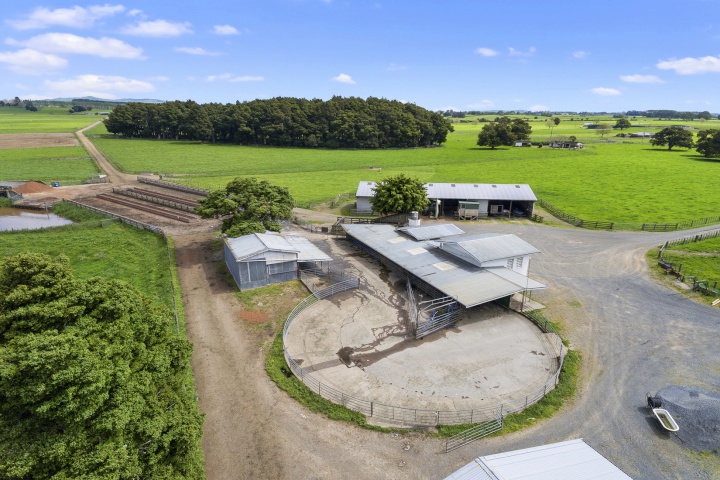 A rare opportunity to participate in the wealth generated by Tatua Dairy Co-operative, one of the New Zealand dairy industry’s greatest success stories has arisen in the eastern Waikato.

Firmly located within the ‘golden zone’ of Waikato’s prime dairy district, the family run operation represents the pinnacle of high quality pastoral dairying that has made Tatua, and New Zealand, envied around the world.

Owned by the Houghton family for 50 years the property has consistently generated above average milk solid returns for the district, placing it firmly as the jewel in a zone often coveted for its reliable climatic conditions and central location.

Owner Neil Houghton who died two and a half years ago was well known locally for his extensive collection of vintage engines and tractors which were sold off earlier this year in a well-attended auction, many of them rare John Deere machines.

Bayleys rural agent Mike Fraser-Jones says the care and commitment Neil invested in the property is clearly evident, with its high standard of raceways, ruler straight post and batten fencing and aesthetically appealing tree plantings throughout.

Drainage is almost entirely underground through “Novaflo” and tile draining systems, meaning only a single small drain features across the entire property.

The property is in a district that features some of the country’s largest agri-processors including Fonterra, Silver Fern Farms, Wallace Corporation and Inghams’ chickens.

There are ample primary, intermediate and high school opportunities all within a short bus ride, right up to high school at Morrinsville College only 13km away. The property is also only 22km from Matamata and 34km from Hamilton city.

The farm is milking 500 Jersey cows through two 20 aside herringbone dairy sheds, one of them run by Neil until his death. The cows and all machinery are also available for purchase.

The two properties are joined with a central straight race and production across the two dairy units has averaged 208,000 kilogrammes of milk solids over the past five years, with a peak total production recorded of 215,000 kilogrammes.

The property is being offered as one operational unit, or in two separate operational units of 78ha and 57ha which may provide some expansion opportunities for nearby farmers, or potential grazing options.

Bayleys rural agent Mike Fraser-Jones says the properties are both effectively 57ha, with the larger one featuring an extensive block of native bush. The property is being marketed for sale by tender, closing December 12.

“This is a property that exudes care and attention, and offers an opportunity to participate in the ability of Tatua Co-operative to consistently deliver its farmer shareholders returns well above the industry average, also making it a more appealing, bank-able option for finance,” he says.

The two 20 aside dairy units also incorporate a 300 cow concrete feed pad each, supported with a 250t concrete feed bunker alongside them.

These have been utilised over the years for containing supplement that has included 450t of maize silage, 150t of grass silage, 400t of palm kernel extract and hay. The property has also grown four hectares of maize on farm in the past.

Purchase of the whole property will include a total of four dwellings across both units, providing the opportunity to capitalise on the farm’s proximity to urban centres by offering any resulting surplus dwelling for rental if desired.

“There are equal opportunities here for anyone wanting to invest in an entire dairy unit, or for existing operators who want to expand their own in a prime low input dairying region,” says Mike Fraser-Jones.