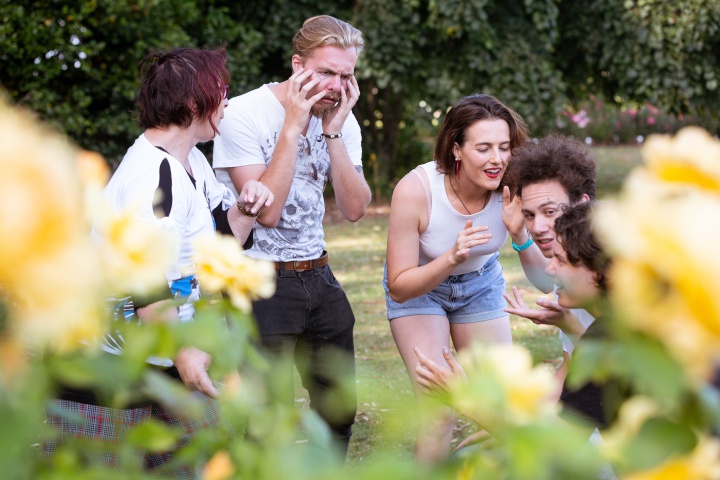 Lust, laughs, and larks in the park

Manawatū Summer Shakespeare turns 18 and is ready to party

Returning for their eighteenth year, Manawatū Summer Shakespeare are delighted to be back in the Victoria Esplanade Rose Garden for a production of Twelfth Night. Perhaps one of the bard’s silliest plays written entirely to amuse the Queen for Christmas, Twelfth Night promises to be a wild, raucous romp of a party.
International Immersive Theatre director and visiting Artist Mel. Cook has crafted a colourful and quirky production of this chaotic comedy. Set in modern day Illyria the inhabitants of this world exist in a vaporwave aesthetic reality where the 80s beats are rocking and the colours are constantly clashing! Think 80s and 90s nostalgia meets 21st century tech.
Made by the community, for the community, all shows are entry by koha (donation). A jewel in the crown of the arts calendar in our region, Manawatū Summer Shakespeare is fuelled by volunteers along with professionals from all walks of our creative communities. From builders and painters to marketers, stage managers, actors with day jobs, students, and seniors, we all come together, many returning year after year, to celebrate theatre in the gardens.
Twelfth Night celebrates LGBTQIA+ people like no other Shakespeare play. Manawatū Summer Shakespeare promise this 2020 performance is the most inclusive production yet; the play is queer and family friendly and the stage placement around the duck pond in the Victoria Esplanade Rose Gardens allows for easy wheel chair or pram access for audience members, too.
Get ready to party like it’s 1989! Spot prizes for anyone who comes dressed up.

“Come celebrate life! Twelfth Night is the Eat, Drink, and Be Merry antidote to the gathering clouds of our times. Pack a picnic, assemble your posse, don a lewk, and sing along with the aesthetic riot in the roses. It is better to crack a glow stick than curse the darkness.” – Director Mel. Cook
“Set in an extremely privileged modern world. These are people who ultimately have the space and freedom to question and remake their identities. Young, well-heeled influencers; older, party letch uncles; and the support staff who actually work. So, a rollicking party with identity bass” – Director Mel. Cook

Manawatū Summer Shakespeare is a collaboration between Massey University, Palmerston North City Council, Square Edge Arts Centre, and the armies of actors and creative artists who give up their summer to bring these accessible, often hilarious, sometimes heartbreaking productions by the undisputed king of verse and crude jokes.