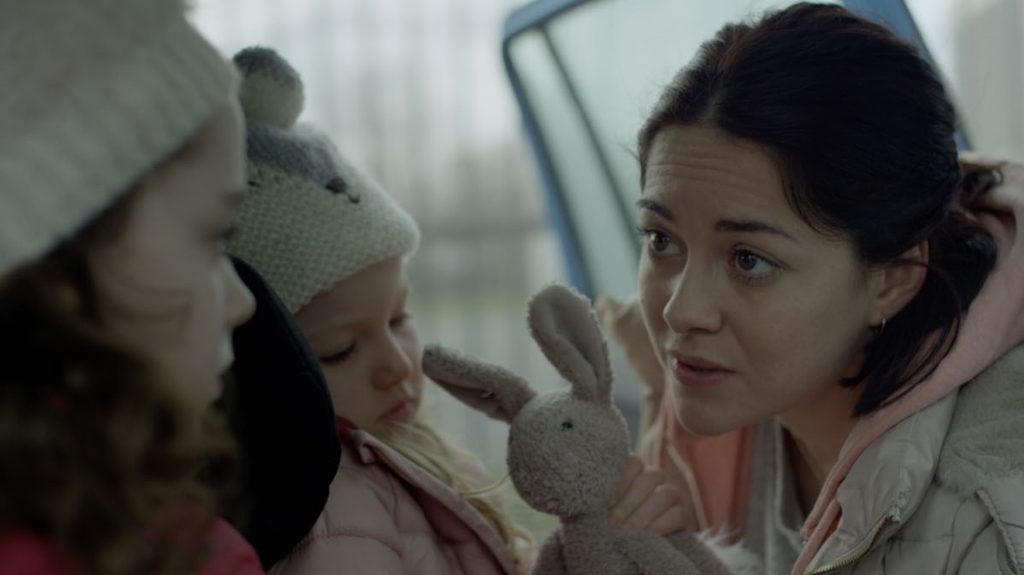 Although Rosie was completed over two years ago, it has only just arrived in New Zealand, but it's been well worth the wait. An intensely grim and gritty fable that covers thirty-six hours in the life of one unfortunate Northern Irish family, it was funded by the Irish Film Board and is producer Roddy Doyle's first original screenplay in over eighteen years. Its unrelenting tone of neo-social realism is reminiscent of both Ken Loach's I, Daniel Blake, and Locke, which similarly managed to hold an audience's attention without ever leaving the inside of a car. It's the sort of movie that would have been termed a 'kitchen sink drama' if they had a kitchen to call their own, rather than surviving on greasy chips, ketchup, and vinegar.

The narrative arc is fairly straightforward and unrelentingly depressing. A family of six has been evicted from their rented home and we follow them in their frantic search to get a roof over their heads. There are anything between 10,000-25,000 people in Ireland categorized as homeless or without a fixed address - and that's excluding single people, addicts, alcoholics, vagrants. It is mainly composed of loose-knit families - mums, dads, and children - without the warmth and safety of home. The personal stress that comes from a deep sense of shame and humiliation is an ever-present reality for these good folk, as they seek assistance from anonymous bureaucrats and welfare officers, as well as teachers, friends, and relatives, constantly afraid in case their children are removed by 'social' services. Ireland's national disgrace lies in the vast number of ghost residencies, empty houses, and apartments that are under-utilised or not used at all. The government has expropriated millions of acres for road development, constructing car parks, and building paths for bikes and pedestrians, but seems incapable of providing houses and apartments for its citizens.

Rosie's partner John Paul (Moe Dunford) works in a restaurant kitchen. Until their landlord decided to sell up, they were all living a happy and socially responsible existence in a rented house in North Dublin. While John Paul washes dishes, Rosie drops the kids off at school and spends her days looking for somewhere else to rent. But prices have become unaffordable and during their increasingly panicked search for a new place to call home, they find themselves having to beg social services for interim overnight placements in hotel rooms, a different place each time. They constantly struggle to 'keep up appearances,' while the possibility of having to sleep in the car gets ever closer. Rosie cannot bring the family to stay with her widowed mother for personal reasons that are briefly hinted at and the strain of not admitting to their friends or their children’s teachers what is happening is almost unbearable.

We follow the family as they visit each individual station of their domestic cross. Perhaps the most unbearably sad moment comes when Rosie and her family go to a cafe that is about to close and get 'ready for bed' by making individual trips to the toilet with their towels and toothbrushes, before traipsing out together again to the car. There is a terrible, wrenching sadness in this film, as well as great rage at the unfairness of their situation.

Director Paddy Breathnach imposes a claustrophobic atmosphere that precisely captures the intimate family drama by means of wonderfully naturalistic performances and intrusively close-up Steadicam work. It is powerfully acted, especially by Sarah Greene in the leading role. When she briefly cracks under the strain, her voice becomes a raw blade that savagely pops through the bubble of safety she's trying to sustain for the sake of her children, but no longer believes in. And there is no comforting, happy Hollywood resolution.

This intimate family drama remains heartbreakingly relevant, infused with a coldly righteous fury as chilling as cinematographer Cathal Watters’ icy winter-blue palette. Since the film was made, the housing situation in 'advanced' Western industrial countries has only deteriorated further. The film's power derives largely from depicting the “homeless” not as a caste or tribe whose condition has been preordained at birth. Their situation is not the result of some sort of a karmic punishment for dishonesty or laziness. They are just ordinary working-class people who are prepared to follow the rules and play the game, but whose dire plight has been created by the ineluctable pressures of market capitalism and economic forces way beyond their control.