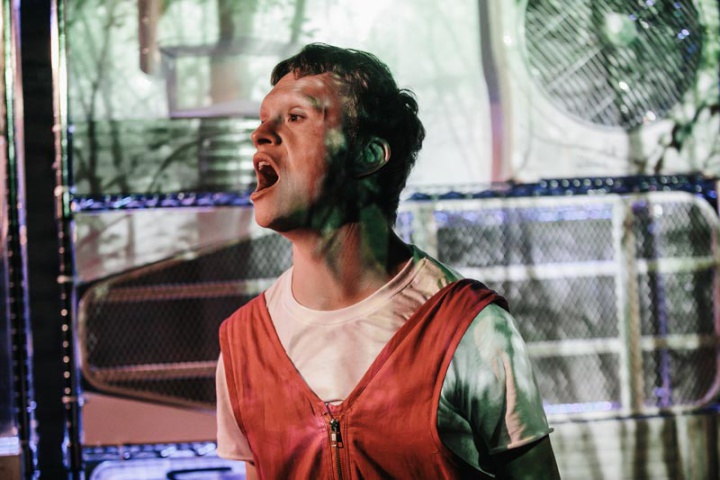 Even as a toddler Wellington performing artist Duncan Armstrong couldn’t stop dancing to music and once he got a taste of acting at primary school he was hooked.

“I didn’t really decide to become an actor, it came to me at primary,” says Duncan who is now 31 and a trailblazer when it comes to breaking down the barriers that face disabled performers.

Duncan, who has Down syndrome, has spent the past 14 years pursuing his career with single-minded determination. He’s not about to be pigeon-holed: he wants to do everything.

“I want to do more stage and screen roles, music, dance and acting. And I’d like to make my own film one day too.”

As Wellington director Isabel MacKinnon, who worked with Duncan on his 2018 award-winning solo theatre show Force Field observes, he embodies motivation and professionalism.

“He’ll routinely arrive at rehearsal before me, get changed and undergo his own personal warmup while everyone else is still trying to find the coffee plunger,” she says.

That determination and persistence was recognised at Te Putanga Toi Arts Access Awards 2020 on 13 October when Duncan won the Arts Access PAK’nSAVE Artistic Achievement Award for the outstanding artistic achievement and contributions of an artist who has a physical sensory or intellectual impairment, or lived experience of mental illness. The award carries a prize of $3000.

In their comments the judging panel said: “Everything about Duncan Armstrong’s artistic achievements has the wow factor! He’s produced a significant body of work across a range of artforms. He’s demonstrated enormous perseverance in overcoming obstacles and pursuing his career, and his list of achievements is thoroughly deserved. Duncan has transformed perceptions about disability and in doing so has created a pathway for others. Thank you for your outstanding contribution to the arts and to the disability sector.”
Life as a performing artist is always precarious but artists with disabilities face additional challenges. Getting access to training is hard – “People turn you away,” Duncan says – and finding roles is hard too.

However, Duncan is determined to help break down those barriers. “People should be more accepting – let us join. Turning us away isn’t fair. People with disabilities are part of life – we need to see ourselves onscreen and onstage.”

And despite the barriers, he’s managed to build an impressive CV that runs for several pages. After getting into acting in a more serious way while attending Wellington’s Onslow College, Duncan then completed at Certificate in Foundation Music at Whitireia Community Polytechnic. He’s been playing the drums since childhood and now has a band with his father called Mr Handsome. “I kept calling my father the old man, which he didn’t like so I started calling him Mr Handsome,” says Duncan.

His career began to take off when he got a role in the television programme Nothing Trivial in 2011. By that stage he was also a member of Wellington Integrated Dance (WIDance) and Auckland’s professional inclusive company Touch Compass.

Through WIDance and Touch Compass, Duncan has developed and fine-tuned his dance skills. In 2015, he was selected as a Touch Compass company dancer performing in Acquisitions, a powerful and moving multi-media dance production that toured to Hamilton and Wellington. The show included a film featuring Duncan called Drumming Is Like Thunder, which won the Most Original Film Award at the 2016 Sit Down Shutup and Watch Film & New Media Festival in Australia, and also screened at the 2017 Sydney Film Festival.

In 2018 Duncan worked with Isobel MacKinnon to create Force Field, a 25-minute solo show that won six awards at the 2018 Auckland Fringe Festival, including a Best Performance award. Reviewers described the play as “captivating”, “delightful” and “emotionally engaging”.

More recently, Duncan performed in a short film, The Last Man on Earth, a sci-fi thriller with a message about the worth of people with disabilities that was written and directed by April Phillips. Duncan’s performance in the film has already won several international film awards, including one for Best Supporting Actor at the Independent Shorts Awards in Los Angeles.

Like others who have worked with Duncan, April Phillips is full of admiration for his work ethic and commitment, pointing out that he even did his own stunts in the film.
“He’s an instinctive, dedicated and utterly professional performer,” she says. “The only limits he has in life are those imposed on him by other people’s scepticism.”