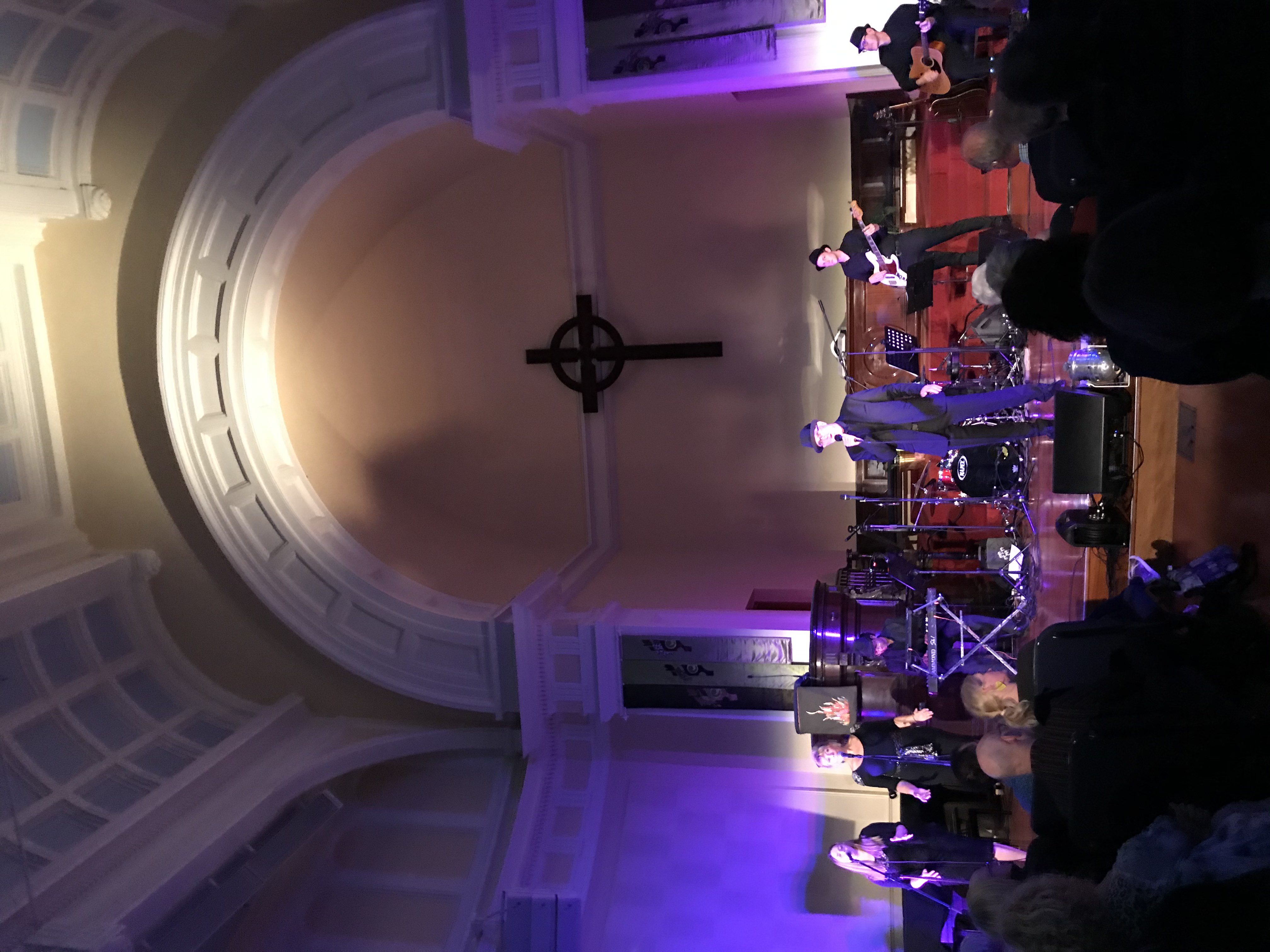 "Ring the bells that still can ring,
Forget your perfect offering,
There is a crack in everything,
That’s how the light gets in."
- Leonard Cohen, Anthem.

Imperfect Offering are a nine-piece band that perform Leonard Cohen's best-loved songs with beautifully sparse arrangements and tightly orchestrated harmonies. Lead by the smooth high baritone of Peter McMillan, the band includes Amy Skeates and Clare Martin on harmony and lead vocals, Nick Jones on electric violin, Rian Bond Kannemeyer on lead guitar, Nigel Pizzini on vocals and acoustic guitar, Jonathan Meyer on bass, Paul Naveen on drums, and Ben Fernandez on keyboards, while G Fleury mixes their live sound. Together, they are capable of reinventing dozens of tunes from Cohen's songbook, from his 1967 debut The Songs of Leonard Cohen to his last album You Want it Darker, released just weeks before his death in 2016, and 2019’s posthumous Thanks for the Dance. Radio 13's Roger Bowie, has described them as “a band of gypsies and teachers, professional and amateur, who love their work.”

When McMillan began learning to play guitar in 1972, one of the first songs he learnt was Suzanne. Inspired by the I’m Your Man tribute album and Cohen's own public performances in the last decades of his life, McMillan decided to form a band to do Leonard Cohen tribute concerts in Aotearoa. Imperfect Offering first got together in 2014 and have been performing together since April 2015. The band, including an eclectic variety of musicians from jazz, classical, country, and rock backgrounds, enjoyed sell-out concerts in Auckland in 2016 and appeared on TV1 News when Cohen died in November 2016. A North Island commemoration tour began with sellout concerts at Meteor Theatre, Hamilton, and the Q Theatre, Auckland, in 2017, and continued into 2018, when they played to full houses at the Pump House Theatre, Takapuna, Ascension Wine Estate, Matakana, and MTG Century Theatre, Napier. One of Imperfect Offering's largest audiences to date was in the Auckland Town Hall's Concert Chamber in October 2018, while the band's first appearance in the Wellington earned them a standing ovation in St Andrews on the Terrace. In 2019, they were invited back to perform at Ascension Wine Estate, then toured the North Island, including New Plymouth, Hamilton, Auckland, and Baycourt, Tauranga.

Cohen (1934-2016) was a Canadian singer-songwriter, poet, and novelist, whose work explored religion, politics, isolation, depression, sexuality, loss, death, and romantic relationships. He pursued a career as a poet and novelist during the 1950s and early 1960s, and did not begin a music career until 1967 at the age of 33. His first album, Songs of Leonard Cohen (1967), was followed by three more albums of folk music - Songs from a Room (1969), Songs of Love and Hate (1971), and New Skin for the Old Ceremony (1974). His 1977 record Death of a Ladies' Man, co-written and produced by Phil Spector, moved away from Cohen's previous minimalist sound, to which he returned in 1979 with the more traditional Recent Songs, which blended his acoustic style with jazz, East Asian, and Mediterranean influences. Cohen's most famous song, Hallelujah,” was first released on Various Positions in 1984. I'm Your Man (1988) marked Cohen's turn to synthesized productions and in 1992 he released its follow-up, The Future, which contained dark lyrics and prophetic references to political and social unrest. After taking a break to study Zen Buddhism at a monastery on Mt Baldy, Cohen returned to music in 2001 with the release of Ten New Songs, which was a major hit in Canada and Europe. His eleventh album, Dear Heather, followed in 2004. After a successful string of tours between 2008 and 2013, Cohen became extremely prolific during You Want It Darker, released in 2016, three weeks before he died. A posthumous collection of songs entitled Thanks for the Dance was released in 2019, his fifteenth and final studio album.

In the early 1960s, and already with a reputation as a bit of a stick man, Cohen used a small inheritance from his grandmother to purchase a villa on the Greek island of Hydra, where he lived with Marianne Ihlen, with whom he remained in a relationship for most of the decade (she died of leukemia three months and nine days before Cohen). His farewell letter to her, often misquoted by the media, was read at her funeral - “I'm just a little behind you, close enough to take your hand. This old body has given up, just as yours has too … I've never forgotten your love and your beauty. But you know that. I don't have to say any more. Safe travels old friend. See you down the road. Endless love and gratitude.”

In the 1970s, Cohen entered into a relationship with artist Suzanne Elrod, who took the photographs for Live Songs and is pictured on the cover of the Death of a Lady's Man. She also inspired the Dark Lady of Cohen's book Death of a Lady's Man (1978), but is not the subject of one of his best-known songs, Suzanne, which refers to Suzanne Verdal, the former wife of a friend, the Québécois sculptor Armand Vaillancourt. Despite having two children together, Cohen and Elrod separated in 1979, with him later stating that "cowardice" and "fear" prevented him from marrying her. Cohen met French photographer Dominique Isserman in the 1980s and they worked together on several occasions before becoming involved romantically. She shot his first two music videos for the songs Dance Me to the End of Love and First We Take Manhattan, and her photographs were used for his 1993 book Stranger Music, his album More Best of Leonard Cohen, and the inside booklet of I'm Your Man (1988), which he also dedicated to Isserman. By the 1990s, Cohen was involved with actress Rebecca de Mornay, who co-produced Cohen's 1992 album The Future, which is also dedicated to her with an inscription that quotes the Old Testament. Eliezer ("God is my help" in Hebrew) is part of Cohen's Hebrew name and Cohen sometimes referred to himself as "Eliezer Cohen," so it is hardly surprising that so many of his songs possess a spectral, Sephardic quality. 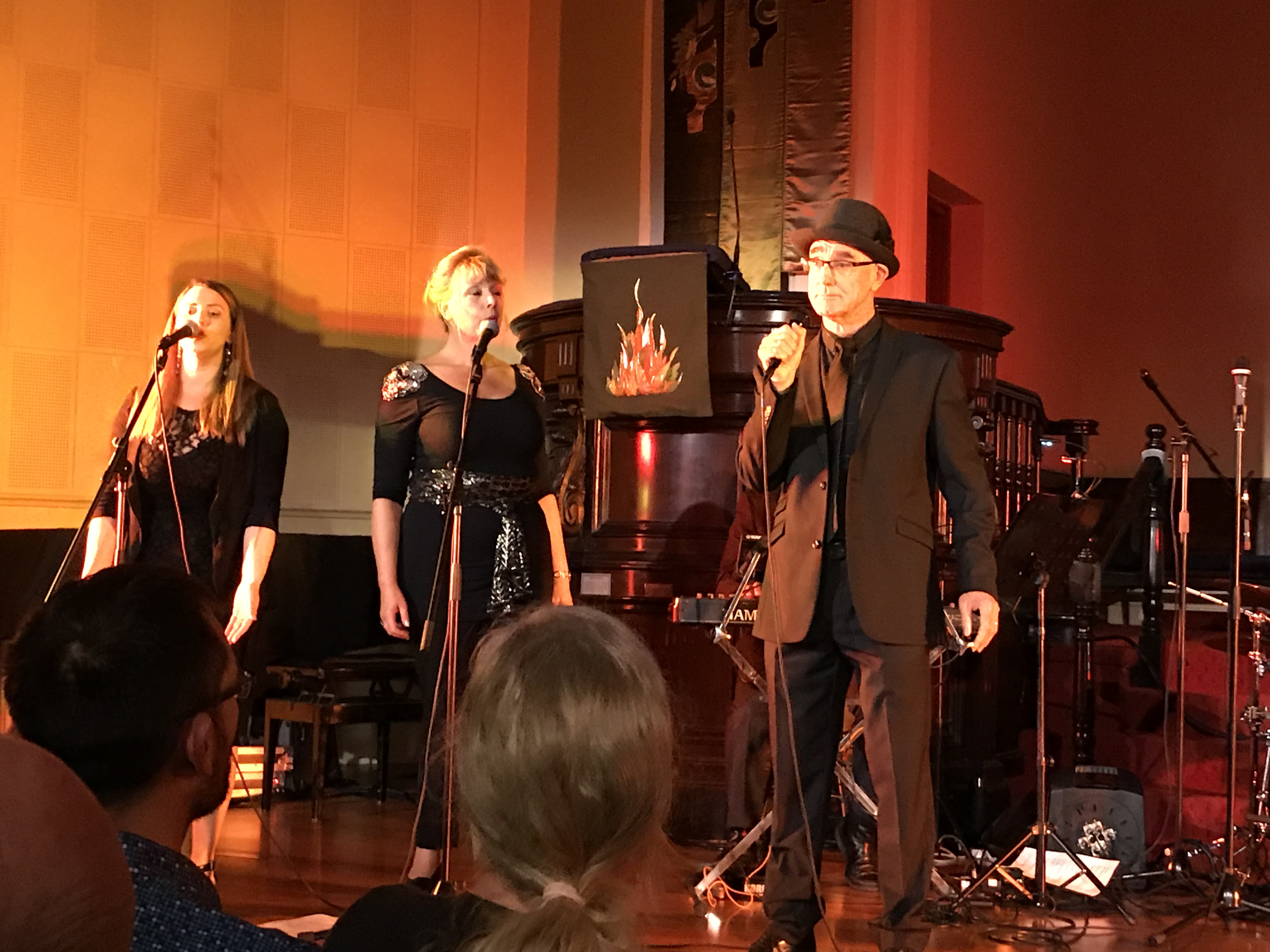 With a journey that spanned his Jewish upbringing in Montreal, through Greek Island life, to hanging out in New York’s Chelsea Hotel and the Zen Buddhist sanctuary on Mount Baldy, Imperfect Offering presented the best songs from Cohen's journey. Such an extensive range of material forced them to be selective and their recent Wellington audience was treated to classics like Suzanne, Bird on a Wire, So Long Marianne, and Joan of Arc but no Chelsea Hotel or Closing Time. As the band started in on Dance Me to the End of Love, the audience was immediately transported to the Aegean supported on the wings of Jones' soaring violin solos and Kannemeyer's crisp guitar licks, plus heavenly harmonies from Skeates and Martin. Hits like First We Take Manhattan and Hallelujah (with one verse sung in Te Reo by Martin) got the house nodding in approval. Highlights of the second set included Ain’t No Cure For Love and Alexandra Leaving, while Pizzini presented a moving spoken word version of The Future, delivering the lines in a deep bass growl that was eerily reminiscent of the man himself. The set then accelerated through sprightly versions of Come Healing and In My Secret Life from Old Ideas into the sombre shadows of You Want It Darker (an album as well as a song that includes the immortal line “kill the flame”) and the glorious finality of Anthem and Thanks for the Dance.

Performing on the eve of the US presidential election results, it was in many ways a sombre evening, one that reminded the audience of our precarious existence on this planet and the dire necessity for love and companionship during such tumultuous times - as well as maintaining a suitable degree of sartorial elegance. Cohen was nothing if not a snappy dresser, and the bands' stylish hats and tailored suits paid tribute to a poet and singer/songwriter who never flinched from looking good in the right light.