The number of breeding pairs of New Zealand’s threatened whio (Blue Duck) has almost tripled over the last 10 years, according to a survey released today by the Department of Conservation (DOC). 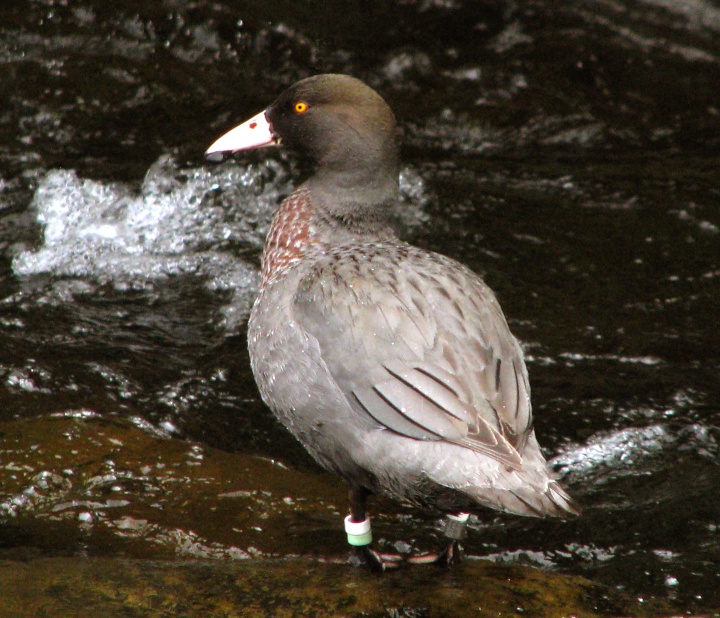 There are now 863 whio breeding pairs living in eight protected sites across the country – 565 more pairs since 2011 and an increase of 190%.

“With ongoing support from Genesis, DOC’s goal is to take whio from ‘threatened’ status to ‘at-risk’ and grow New Zealand’s national whio population from less than 3,000 to more than 5,000 birds.”

The majority of the funding from Genesis goes directly towards predator control. Over the last decade, more than 5,000 traps have been laid by hundreds of DOC staff and volunteers at key sites across the country. This means almost 1,700 kilometres of river is now protected, providing secure sites where whio can thrive.

Genesis Chief Operating Officer Nigel Clark says the company is proud to be part of a partnership that is achieving such meaningful results.

“It takes a community to raise a whio. The wins we’re celebrating today are driven not only by the partnership between DOC and Genesis, but also through the hard work of many individual trapping enthusiasts, privately run trusts and businesses that hold whio breeding pairs, hatch whio eggs and raise their chicks.”

Lou Sanson says the whio population has continued to climb despite the challenges of a mega-mast (heavy seeding) and severe flooding, along with predator control delays due to bad weather and Covid-19.

“Our growing whio population demonstrates the resilience of the species. But its survival is still very much dependent on our conservation efforts, which demand time, money and hard work. The gains we’ve made over the last decade could easily be lost in a season, so we can’t rest on our laurels. There is still a lot more to do.”

Today, DOC and Genesis renewed their recovery partnership at an event in Turangi, joined by iwi, community leaders and volunteers. A commemorative predator trap was also laid to mark the occasion.

“DOC and Genesis are in this for the long haul. With support from the wider community and Iwi, we can ensure the survival of one of our most precious native birds,” Lou Sanson says.