“Our Parliament has just approved a $52 billion funding envelope for the current crisis. However, with the tax take falling, accessing new revenue sources will be more important than ever. For many states in the US, tax revenue from legalising cannabis is significant, with the likes of Colorado raising hundreds of millions of dollars annually. The prospect of our Government taking control of the black market and redirecting revenue back into the health sector, looks increasingly attractive,” he says.

Mr Manning’s comments come as an independent survey of nearly 2,000 New Zealanders has revealed 83% don’t believe the prohibition of personal cannabis use is working, and 72% say having controls for growing and selling cannabis for personal use would be better for society.

The large public survey has also revealed 54% of New Zealanders would vote for legalising the personal use of cannabis in September’s referendum when the previous ‘no opinion’ option is removed. Those against sit at 45%, with 1% refusing to answer the question.

Forcing a yes or no response has the latest survey once again showing majority support for legalisation – up six points from 48% in November. In August support was recorded at 39%; April last year support was at 52%, while in November 2018 it was at 60%.

Mr Manning says, given it’s just six months until the General Election, it was timely to force survey respondents into a yes or no position on the personal use cannabis referendum.

“Other opinion polls are still giving people a ‘don’t know’ or ‘no opinion’ option which suppresses the numbers and allows people to sit on the fence – a luxury they won’t have in the ballot booth.”

He says there’s general acceptance that polls on this issue will continue to move around, but notably this is the first time since November 2018, in this series of tracking polls, a majority of all age groups between 18 and 64 years say they will vote for legalisation and control.

“Support has climbed back up over the past six months. This referendum may be closer than most pundits probably think, with party turn-out critical and messaging also set to play an important role in the end result,” says Mr Manning

Horizon’s tracking of public opinion on the referendum over the past 15 months makes it the most significant series of surveys on the issue. However, for the first time, two questions about whether prohibition is working to limit the availability and use of cannabis, and whether controls would deliver a better outcome for society, have been asked.

On the question as to whether the prohibition of cannabis for personal use was working in New Zealand, a staggering 83% said no, 14% said yes, and 4% gave no response.

The overwhelming view that prohibition is not working was stronger among middle-aged and older New Zealanders. Likewise, the support for controls over growing and selling cannabis for personal use strengthened in older age groups.

Nearly three-quarters, 72%, of respondents believed controls would deliver a better outcome, 26% supported continuing with no controls, and 2% didn’t give a response.

“Kiwis have clearly spoken. They are unified in their belief that prohibition is failing, and controls would be preferable. However, this survey also highlights a real paradox. Older and conservative Kiwis, in particular, openly accept cannabis is widely available and controls would be better, but they don’t want a bar of the referendum which would trigger the Cannabis Legalisation and Control Bill. It begs the question, what do they want?”

He says the survey shows the polarising issue remains mostly a partisan political one, but this latest confirmation of societal failure may just prompt many to rethink.

“Over the next six months, Kiwis need to consider who they ultimately want to control the cannabis market. It’s either gangs or government. Through regulation you can ensure product quality, a safer environment for Kiwis, and significant tax revenue for healthcare,” he says.

Mr Manning says the latest survey highlights to referendum proponents that not only do they need to get younger, liberal people voting, but they should talk less along the lines of ‘freeing the weed’ and more about the benefits of introducing regulatory control and hitting the gangs where it hurts.

“It’s too early to call which way this will land. What we do know is that most of us agree, prohibition isn’t working. The answer may well be control through regulation, and that’s what proponents should focus on. This is key to the referendum passing, along with the turn-out of younger voters,” says Mr Manning.

Commissioned by Helius Therapeutics and carried out independently by Horizon Research, the results are from of a series of nationwide online surveys of adults representing the 18+ population at the last census. The most recent survey of 1,986 respondents was conducted between 21 to 26 February 2020. Respondents were members of Horizon’s national panels and a third-party nationwide research panel. Results are weighted by age, gender and party voted for at the 2017 general election. At a 95% confidence level, the maximum margin of error is ±2.2%.

Question: Currently, producing cannabis for personal or non-prescription use is prohibited in New Zealand, with the intention of limiting its availability and use. Do you think prohibition of cannabis is working in New Zealand society?

• 14% - Yes, cannabis is hard to access and rarely used in New Zealand society.

• 83% - No, cannabis is available and used by many New Zealanders.

Question: Currently, growing cannabis for personal use is prohibited in New Zealand. Which one of the following options do you think will have a better outcome for New Zealand society?

• 26% - Continuing with no controls over growing and selling personal use.

• 72% - Controls over growing and selling personal use. 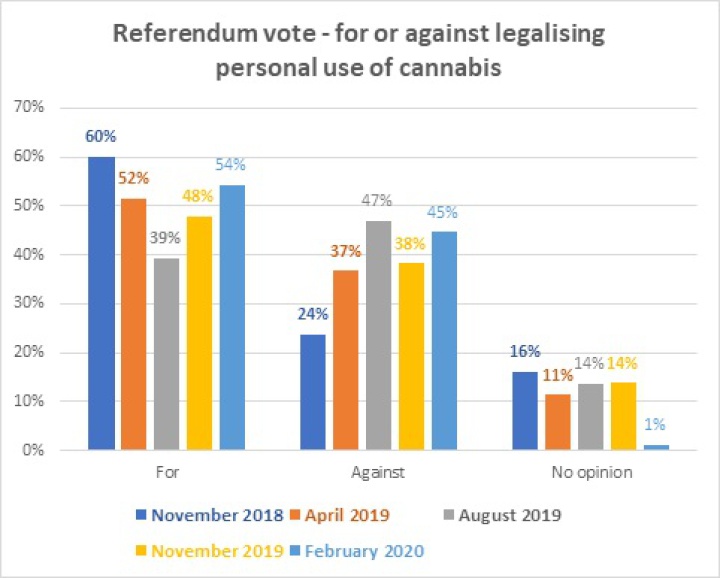 Question: At this time, do you think you will vote for or against legalising cannabis for personal use in New Zealand?

Helius is a New Zealand-owned biotechnology company focused on medicinal cannabis research and development. We are the country’s largest licensed producer and the first medicinal cannabis cultivator to be certified as New Zealand Grown through Buy NZ Made Campaign. The company is building a state-of-the-art facility in Auckland with indoor controlled growing systems, integrated extraction site, an advanced cannabinoid research laboratory and manufacturing operations. As New Zealand’s regulatory environment changes, Helius is poised to set the standard for effective and accessible medicinal cannabis products in New Zealand.