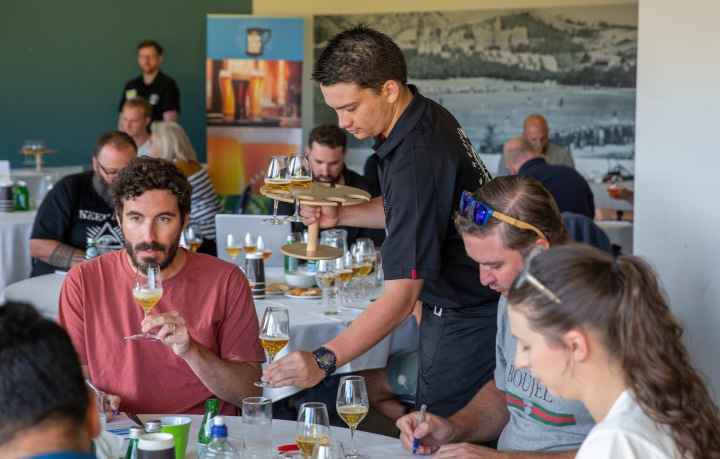 In what is believed to be a first in New Zealand beer awards, an alcohol-free beer has been given top marks alongside full-strength winners in the 2020 New World Beer & Cider Awards.

Chair of Judges, beer writer and author Michael Donaldson says the judges who assessed the entry were blown away by Bavaria 0.0% Wit, a Belgian-style wheat beer from the Swinkels Family Brewers in The Netherlands.

“The judges were stunned when they tasted this zero-alcohol beer,” he says. “There was so much chatter at the table about what they’d just experienced.”

Donaldson explains that the judges taste all the beers blind – meaning they only see the beer in the glass and are made aware of the style and alcohol content.

“While this was noted as an alcohol-free beer, it completely surprised the judges. It is extremely easy to believe you are drinking a regular-strength beer with this winner.”

He says the Witbier style usually showcases orange zest and coriander and uses yeast-derived flavours to add complexity. These qualities lend themselves well to a zero or lower alcohol beer, bringing complexity and depth.

“The beer has a bubblegum and citrus flavour profile plus the wheat brings a full-bodied mouthfeel, so it’s hard to detect the difference compared with a higher alcohol beer.”

Donaldson said the comments from one of New Zealand’s most experienced beer judges, summed up the beer: “It blew my mind,” he said.

The beer hit New World shelves nationwide this week for New Zealanders to try, and now sits alongside a growing range of low and no alcohol options.

Heineken Light at just 2.5%, also features as a Top 30 winner and was praised by the judges for achieving its flavour with roughly half the usual alcohol content of a traditional lager.

Peter Simons, Managing Director at DB Breweries, explains that the high praise of Heineken Light in the 2020 New World Beer & Cider Awards is in line with a growing consumer trend towards low and no alcohol beer.

“We have for some time now been seeing a growing trend towards products with lower alcohol and carbohydrates, with nearly one in every 10 beers bought in New Zealand being either a lower carb, or a low or no alcohol product1. As leaders of the segment, this emerging market is an exciting one.

“We’re proud to offer Kiwis a number of delicious options in this growing sector, including great products like Heineken Light,” says Simons.

Terry Vaa, Senior Category Manager for beer at Foodstuffs says he is excited to see such a broad range of beer strengths represented in the New World Beer & Cider Awards Top 30.

“We know that more and more shoppers are looking for low and no alcohol options in the chiller and it is great to be able to offer two beers in this category that were judge gold-standard by expert judges.

“These winning beers show that brewers are not only meeting consumer demands for these options but meeting their taste expectations as well.”