Working towards gender and ethnicity balance

Working towards gender and ethnicity balance in the screen sector 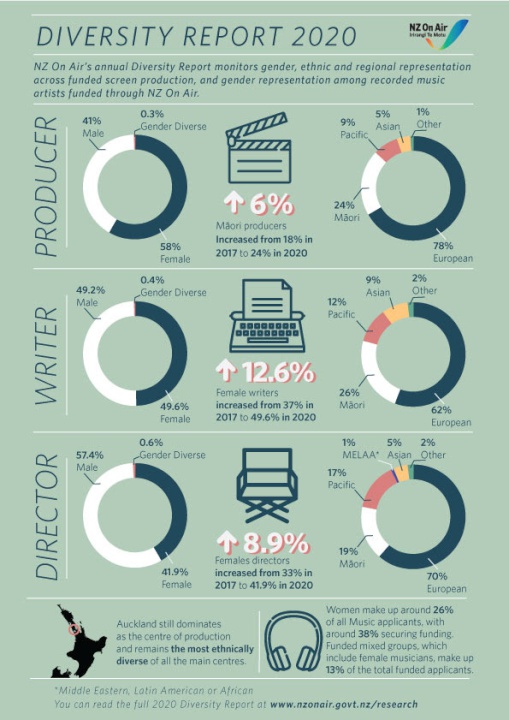 Women are well-represented among writers and producers in screen content, but still battling for their place as directors, and we need more Asian screen creatives in all creative roles, and more women recording artists, according to the latest NZ On Air Diversity report.

NZ On Air has now gathered five years of comparable data from funded Scripted and Factual content, and three years of funded music. This allows NZ On Air to report on consistent trends and notable data shifts in several areas of the NZ On Air funded production and music sectors.

For the fifth year in a row female producers outnumber male producers in Scripted and Factual content, with 58% of producing roles filled by women, 41% by men and 0.3% of producers identifying as gender diverse.

Women are also well represented amongst writers, making up 49.6% of writing roles in 2020. The gender split of writers has been fairly stable over the last three years, but has notably increased since 2017 in which women only made up 37% of writers.

The gender imbalance amongst directors continues, with 41.9% of directors identifying as female compared to 57.4% male in 2020. Male directors have consistently outnumbered women in the genres of drama, documentary and children’s programming across the previous five years of this report. However, this year’s report sees a notable change in one genre, with women now making up 55% of documentary directors.

There is a consistent under-representation of Asian creatives in all three roles surveyed: producer, director and writer. However, Asian writers increased from 2% in previous years to 9% in 2020. This still tracks below the 15.1% of the population who identify as Asian but does show a steady trend upwards, possibly due to targeted funding initiatives by NZ On Air in the past year.

In 2020, 23.5% of producers identified as Māori, an increase on the previous year and Pacific Peoples made up 9% of surveyed producers, both figures above the national representative populations for Māori and Pasifika.

In music, there’s a strong male skew. The number of female music artists funded, while in line with the percentage that applied, continues to be significantly lower than male artists. In New Music Single funding rounds women make up 20-30% of all funding applicants, with roughly 38% of those female applicants receiving funding. These figures are reflective of the numbers of female artists who are members of the music professional body APRA AMCOS NZ (23.8% women).

NZ On Air CEO Cameron Harland says it's clear that some targeted interventions could help change the diversity of the screen and music sectors.

“There are a number of ways through development and mentoring in particular that we can help to encourage change. We will continue to work with the screen and music industries to support initiatives that give more opportunities to under-represented groups,” he continued.

Mr Harland says for New Zealand’s screen stories and songs to authentically reflect Aotearoa, they need to be made by people that are representative of the audience.