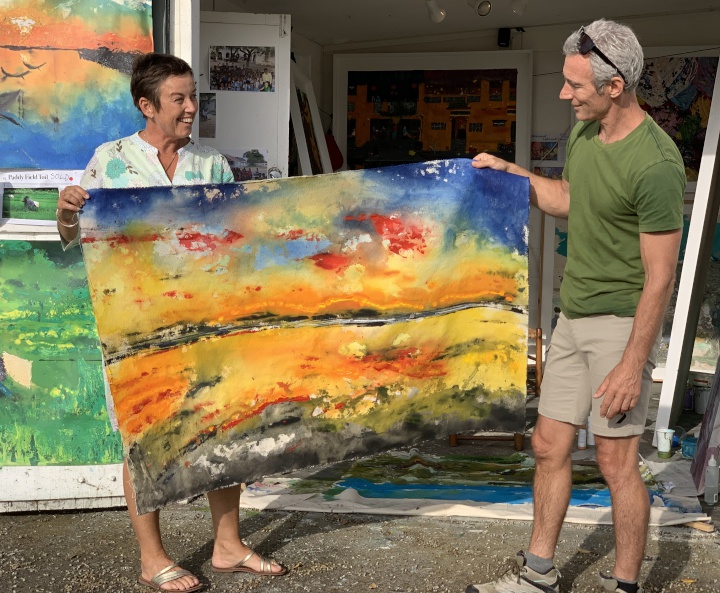 Local abstract artist Tania Dally was looking for photographic inspiration to paint some iconic Kapiti sunsets when she discovered the work of Kapiti-based actor Jed Brophy.

The result is the upcoming Kapiti Sunsets: Pixels and Paint Exhibition featuring six of Jed’s photographs, alongside Tania’s abstract acrylic-on-canvas interpretations. The event is being held at Tania’s Boatshed Studio at Raumati Beach on Friday 20, Saturday 21 and Sunday 22 March.

Jed is well-known for his acting with a long list of credits including Lord of the Rings and the Hobbit trilogy where he played the dwarf Nori. What is less well-known is that for many years Jed has practised his passion for photography, which is showcased via his website and Instagram feed.

Tania’s distinctive abstract painting style can be seen at her Raumati studio and she has been a regular on the Kapiti Arts Trail for a number of years. Her most recent exhibition featured a series of scenes from Hoi An, Vietnam where she lived and painted for three months last year.

“Having spent three months painting in a foreign country, I wanted to return home and capture some iconic Kapiti scenes,” says Tania. “There is nothing more iconic than our amazing sunsets and when I discovered Jed’s photographs I immediately saw the potential for a series of paintings.”

Often featuring reflections off a glistening Raumati Beach at different times of the day and night, Jed’s photos typically involve a lengthy vigil to capture the moment. “Contrary to what many people think, there is no manipulation or Photoshop involved. It’s all about waiting for that magical combination of light and colour that creates an image of beauty and complexity,” says Jed.

Tania points out that her paintings are not attempting to reproduce Jed’s images exactly as they appear. “Instead I am looking to play with the light, shapes and colours to capture the essence and energy inherent within the image, as well as inject some of the emotion from personally experiencing many stunning Kapiti sunsets,” she says.