On February 2nd 1996, SkyCity Auckland officially opened its doors to the public and to celebrate SkyCity will be hosting a free ‘90’s themed Federal Street Party this Friday 29 January 2021, with a stellar line up of Kiwi artists from the era. 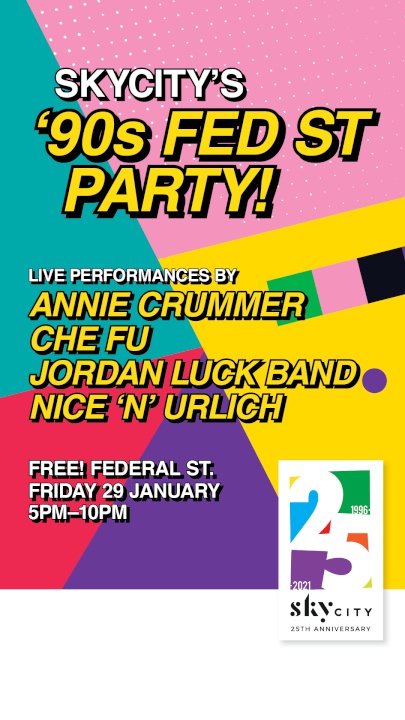 Kiwi music greats Annie Crummer, Che Fu, Jordan Luck and Nice ‘n’ Urlich are headlining the festival and Federal Street will be shut to make way for a selection of mouth-watering Kiwi kai and a Fortune Favours pop-up bar.

Michael Ahearne says it’s a great privilege to be Chief Executive Officer of SkyCity Entertainment Group while the company celebrates such a significant milestone.

“Since we first opened to the public 25 years ago, SkyCity Auckland has transformed from a casino business into one of Australasia’s largest tourism, leisure, and entertainment companies employing 2,500 staff from a wide range of ethnicities and skill levels, speaking 57 different languages.

“So much has changed since 1996, but one thing has remained the same – SkyCity has always looked forward with our people at our heart and we are proud of the journey we have made in becoming an inclusive workplace that enhances and promotes diversity.

“Around 58% of our workforce is under 36 years old, six percent identify as being a member of the LGBTTI community and 1% identify as having a disability.

“SkyCity’s Diversity and Inclusion initiatives such as Project Nikau and the Tahuna Te Ahi leadership programme for Maori have both been recognised for championing diversity in employment at the Deloitte Top 200 Awards.

“Our people have played an integral role in our success and we are proud to celebrate the 49 staffers who have been with us since day one, a testament to the opportunities we provide and the programmes we’re a part of,” says Ahearne.

SkyCity has played a pivotal role in the local community right from the start, investing in the community in a variety of ways.

“Through the SkyCity Auckland Community Trust we’ve distributed over $49 million to more than 2,500 community groups.

“We’ve backed the Blues, the Warriors, Breakers and the Mystics to name a few and we’re incredibly proud to partner with Emirates Team New Zealand’s for the 36th America’s Cup.

“Our charity partnerships include Leukaemia Blood Cancer New Zealand, and Variety – The Children’s Charity and we light the Sky Tower to raise awareness for dozens of deserving causes each year.

“While COVID-19 has made us a domestically focussed business for now, we’re optimistic about the return of international tourists and will play a leading role in the recovery of the New Zealand tourism sector,” says Ahearne.

SkyCity is carefully monitoring Ministry of Health advice on large events and will respond if circumstances change.

“We have significantly boosted staff numbers, the availability of hand sanitiser and the visibility of QR codes across the precinct, and we will be encouraging every guest to scan in using the NZ COVID Tracer app and turn Bluetooth on,” says Ahearne.

In addition to the Fed Street party, SkyCity is offering half price entry to the Sky Tower for customers who visit on Auckland Anniversary Day – Monday 1 February 2021.