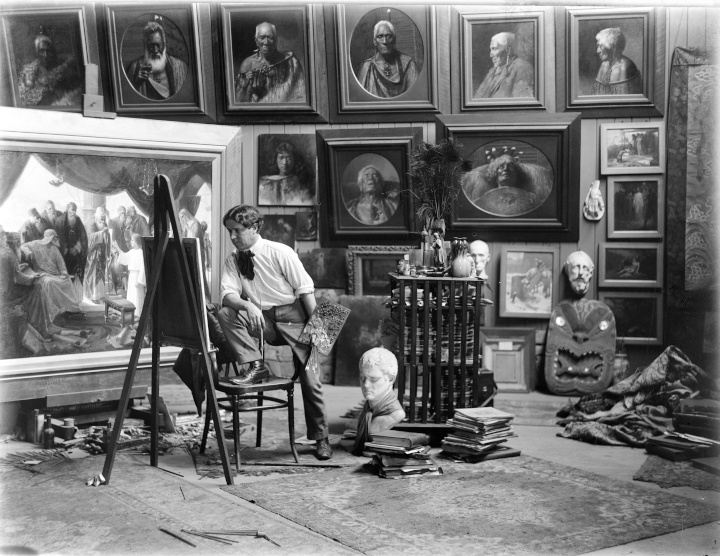 “Charles Goldie is unquestionably one of New Zealand’s greatest and most celebrated artists. These two early 20th century photographs are perhaps the most widely recognised and circulated images of him. Presenting them in an innovative contemporary format is an exciting prospect, and also a first for a major auction house in New Zealand.” Charles Ninow, Director of Art.

(For Immediate Release, 28 January 2022) Webb’s is thrilled to announce the first NFT sale by a major auction house in New Zealand. Online auction Charles Goldie: One of a Kind will open for bidding on Friday 28 January and close on Tuesday 1 February. The auction will consist of two NFTs: Charles Frederick Goldie at His Easel, and Charles Frederick Goldie in His Studio. These two unique digital assets are derived from the original glass plate negatives of two of the most well-known photographs of C.F. Goldie, perhaps Aotearoa’s most celebrated artist. The photographs were evidently taken by Rupert Farnell Studios sometime between 1910 and 1920, and the negatives have survived in excellent condition to this day. In each case, the purchaser of the NFT will also receive a framed contact print of the image, the original glass plate negative in a custom-built pine box.

“It is remarkable to discover the original glass-plate negatives of these well-known photographs. They have made possible the creation of extraordinarily detailed digital scans, which we have used to mint NFTs. This is an excellent example of the special qualities of old technology meeting, and being and enhanced by, cutting-edge contemporary technologies and media formats.” Charles Ninow, Director of Art

The auction will run online from Friday, January 28th until Tuesday, February 1st. Bidding will operate in the standard Webb’s fashion, though in order to take possession of the NFT at the conclusion of the auction, the winning bidder will need to have a blockchain wallet. The digital asset will be transferred to the purchaser’s wallet, and they will also receive the physical objects.

NFTs are blockchain-based digital assets. There are many different blockchains, and Ethereum is one of the most popular. It is often used for minting and trading NFTs. However, it comes with a congested network, inflated costs, and environmental concerns related to its energy use. The NFTs in this auction have been minted on Polygon, which is an Ethereum layer 2 blockchain. This means that it uses the same technology as Ethereum, and is entirely compatible with it. Though transactions on Polygon use a different validation system which is vastly more energy efficient and hence has a much smaller ecological footprint (Ethereum uses proof of work whereas Polygon uses proof of stake – the differences between these systems are outlined on the Webb’s website).

NFTs have caused a stir internationally over the past 12 months. The digital asset format has proven extremely popular, with frenzied bidding at auction houses seeing NFTs sell for mind-boggling prices. Famously, the NFT The First 5000 Days by U.S. digital artist Beeple sold for $69 million at auction in March. Perhaps the most popular and expensive NFT series out there is CryptoPunks. This series of 10,000 unique, algorithmically generated images of pixelated punk characters was created in 2017 and has exploded in value recently. Now, individual CryptoPunks routinely sell for hundreds of thousands to millions of dollars. Bloomberg has reported that the global market for NFTs exceeded $40 billion in 2021.

To view the catalogue of NFTs going under the hammer, please https://bit.ly/3G3W1uh