Wasps buzz off when there are more trees – study 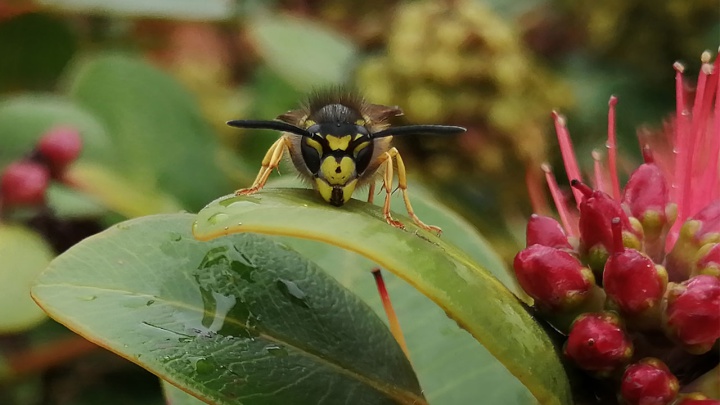 A study on 36 islands off the east coast of the North Island has found low numbers of invasive wasps on islands with better forest cover but high numbers on islands where farming is a significant activity and where high densities of exotic weeds and plants have replaced native forest.

Lead author of the study, Julia Schmack, a PhD student at University of Auckland’s School of Biological Sciences, says wasps are attracted to open grassland with plenty of sunlight and they also like areas of exotic plants.
“Sunlight helps them to warm up and stay active, so areas that are shaded by canopy are not favourable for them whereas open areas of pastureland are,” she says.

“Also, the first plants that grow in areas where forest has been cut down are often exotic weeds and we think some of these may provide better food resources for invasive wasps than native plants..”

Introduced social wasps cause big problems for native species including some endangered species. Invasive wasps compete for nectar and honeydew and are a particular problem in South Island beech forests where they consume massive amounts of honeydew which would otherwise be available for native birds, bats, insects and lizards.

Researchers say there is one type of forest which is an exception to this study’s findings and that is forest infested with high densities of native scale insects that produce honeydew. Honeydew is a vital food for many native birds but wasps consume large amounts of it to the detriment of native birds.

Ms Schmack says the study provides new and important insights that may help control invasive wasps in New Zealand, particularly on offshore islands with endemic wildlife. If there were more forests, it would likely reduce wasp numbers. Re-planting with native trees is an obvious strategy to enhance habitat for native species.

“It’s important to look at the whole ecosystem and the influence humans have on it to better understand invasive wasps,” she says. “A more holistic approach to managing invasive species is also likely to be more sustainable in terms of resource use and conservation gains.”

The research team included scientists from the University of Auckland, Manaaki Whenua - Landcare Research and the Biodiversity and Climate Research Centre in Frankfurt, Germany and is published in Diversity and Distributions.