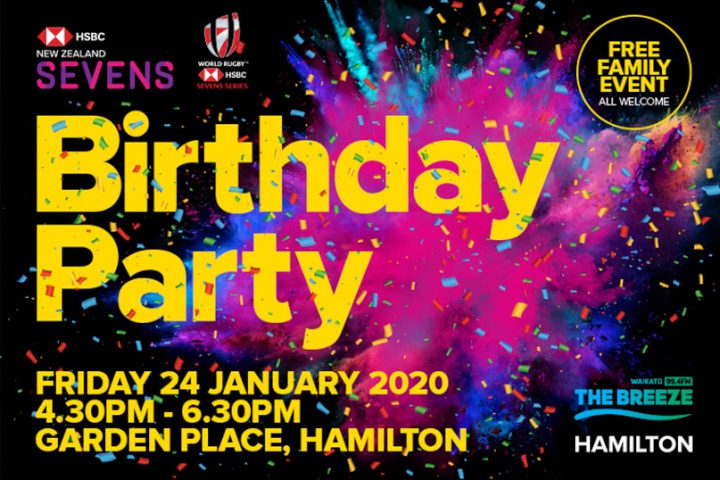 The turf is ready, the teams have arrived, and Hamilton has a real buzz about it!

This weekend’s tournament will be the first fully integrated men’s and women’s tournament in New Zealand and will see the Black Ferns Sevens pooled with Fiji, England and China, while the All Blacks Sevens will be pooled with Scotland, Wales and USA.

Organisers of the 2020 event are promising a jam-packed weekend of activity, which is sure to compliment the fast-paced world-class action expected on the field.

On Friday evening the city will formally launch the tournament with the Sevens’ 21st birthday celebration between 4.30pm and 6.30pm. The family-friendly event will feature local cultural performances, carnival games, birthday cake and prizes. It will also be another chance to meet some of your favourite Sevens players.

There will be plenty of other activities to keep you entertained across the weekend, with three festival zones in action – the Carnival Zone, Keppler X Haval VIP Zone and the Mill Street Park Zone. There will be amusement rides and a range of food trucks set up across the Festival Zones.

Top Kiwi acts Mitch James and JessB are also expected to light up the weekend for sevens fans, while chart-topping reggae-roots band Sons of Zion will perform live on Saturday at the Mill Street Park R18 Entertainment Zone.

Mobility Parking for Sevens fans will be clearly signposted and located on Willoughby St.

Fans wanting to head to the stadium from the south end of Hamilton’s central business district can catch a free shuttle from Hood St to Mill St between 10am and 4pm.

Hamilton’s regular central city liquor ban has also been extended for the HSBC New Zealand Sevens weekend, encapsulating streets around the stadium for the duration of the event. The liquor ban is enforced by Hamilton Police and prohibits the consumption of alcohol in public areas – although residents can still carry unopened alcohol to and from residential homes.

Hosting the tournament in Hamilton is the result of a partnership involving Hamilton City Council, NZR and 37 South Events.

Ticket and event information is available at www.sevens.co.nz