Ch’i Drinks re-energised for the 2020s

Ch’i Drinks re-energised for the 2020s

It has been one year since Ray Nicholls led a buy-out of Ch’i International Ltd. However, the once corporate FMCG executive is reluctant to accept he owns a Kiwi institution.

“I’m not a fan of using the term ‘iconic’ to describe Ch’i. We’re simply not big enough for such a lofty word. Leave that term for Buzzy Bee toys, Dame Kiri and Kiwifruit. Take a look around, it’s not really us and never will be,” says Nicholls.

Now rebranded as The Ch’i Drinks Workshop, 12 months on the business has a new location, new energy, and clear plans to expand the New Zealand beverage brand into the 2020s.

World-famous in New Zealand, Ch’i has been ‘Ch’iiieee - the drink that knows its own name’ since 1987 when a super low budget and kitsch television advertisement locked the beverage into the national psyche.

“Ironically, if you presented the idea of a herbally-inspired natural range of drinks today Ch’i would be praised as being bang on trend with a very promising future. However, three decades ago we were leftfield, with many thinking our time would be fleeting.”

And while the brand has recently been modernised, there has never been a suggestion that the Kiwi-made beverage drops its foreign-sounding name.

Ch’i is a concept of life-force which has been central to traditional eastern medicine and healing for centuries.

In fact, Ch’i Drinks has doubled down on the idea of this innate flow of energy with the ‘reflect, reconnect and rejuvenate’ mantra now on its packaging and website.

But the company owner says they are no students of eastern medicines and make no therapeutic claims for their sparkling herbal drinks. Instead, they remain inspired by the eastern concepts of physical and mental health through self-care, and an ancient view of essential, positive energy flowing from the earth.

In the age of high energy and image-enhancing drinks, controlled by international juggernauts, it’s hard to see how a local drink, with an ancient philosophical connection, can make it in the highly competitive beverage sector.

In fact, Ch’i has held its head high for a third of a century, making it a complete enigma for many industry observers. What’s more fans and Kiwi expats from around the world will be pleased to learn Ch’i is here to stay.

Armed with greater self-awareness, the company is more focused than ever to do what it does best – drinks with handcrafted herbal ingredients and ideas. Despite different attempts over the years, no company’s been able to emulate their taste, or persuade the Ch’i fans to give up their sparkling herbal moments.

“We brought in a clinical psychologist a while back to help understand why our fans love Ch’i. We discovered it wasn’t so much because it’s a drink that tastes great but one that helps you feel better about yourself and life in that moment. Our brand needs to stay true to the idea of being a drink for the moments you put yourself first.”

Regardless of industry attempts over the years to takeover or takeout the company, Ch’i maintains a 100% share of the herbal beverage market in New Zealand. No mean feat. But that doesn’t take into account that some other drinks now actively promote themselves as boasting ‘botanical’ tastes and benefits.

Nicholls is not on the functional foods’ bandwagon, nor is he a promoter of any health claims.

“I’ve been around the food and beverage block a few times in various parts of the world. I now subscribe to the view that hanging your hopes on the promise of functional ingredients is joining an arms race you can never win.

“I sometimes shudder at how some of the functional food and beverage players are blissfully ignorant or maybe just contemptuous of their obligations to the truth under our fair-trading laws.

“We’re not claiming we can cure or solve anything. However, what we do claim is that our drinks support a moment of re-connection and regeneration. And by offering people that space in a busy life, we’re effectively providing a moment of clear air – an opportunity for them to work things out for themselves.”

Under his leadership, the future of Ch’i Drinks is all about focusing on its strengths and not trying to be a drinks generalist up against some relentlessly tough and well-resourced players. Instead, Ch’i is getting on with creating new herbal ideas and crafting its own extracts.

Ch’i Drinks is proudly boutique and its brand reflects this more than ever.

While there was once a colourless distribution centre in Albany, the beverage company now has The Ch’i Drinks Workshop in Auckland’s trendy semi-rural North-West.

Ch’i’s headquarters recently moved to the outskirts of Riverhead, under the shadow of the Riverhead Forest. Nearby it sources its naturally high pH water, but more on that later.

“We are now not just a location for sales receipts and pallets of product, but the home of good ideas and hard toil - where prototypes are conceived, then scaled up.”

“Independent beverage companies love to create an idealistic artisan image, but the reality is there is nothing terribly artisan about modern-day processing and bottling when you factor in all the compliance and regulation. However, at Ch’i we keep the ingredients and process as natural as humanly possible.”

Ch’i Original Herbal Blend is still the company’s leading flavour with the recipe not changing in over 30 years except for a steady decline in its sugar content – once 11.5% but now 8.6% and falling.

Nicholls says if Ch’i is to broaden its place in the market and demonstrate good growth it will need to deliver significant step change, not incremental change.

“We need new channels, new markets, and a new approach. And that’s what’s occupying our minds currently. As someone said to me, it’s risky to rely on incremental change, because by the time you’ve got there, it’s highly likely the world has moved on and your moment has passed by.”

Ch’i is available in almost every New Zealand supermarket, and a good proportion of convenience stores and dairies. The brand is also well established in several hundred retail outlets across the Tasman and in some Pacific Islands.

He says they’re looking closely for business and distribution partnerships in countries such as the United States, Canada, and the United Kingdom. Their ambition is to ship their key herbal concentrates for bottling into new markets outside of Oceania.

“Why ship all that packaging and the water by the container load, when our herbal concentrates fit onto a small pallet?” 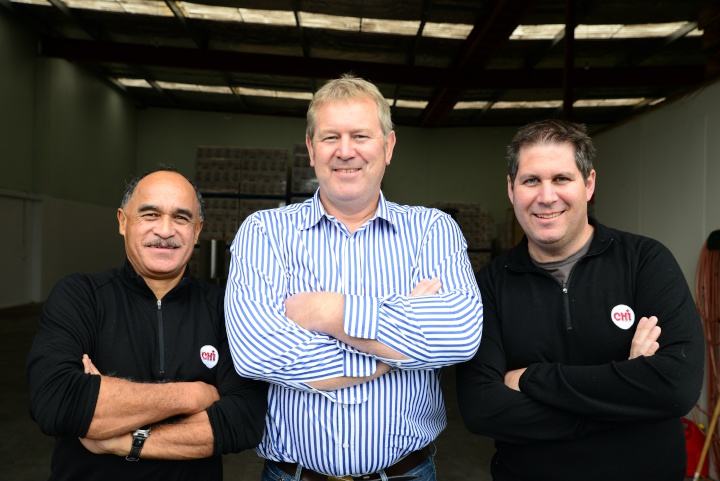 “We have a music studio in Ponsonby where Ch’i is the drink of choice for a group of musos. They’re buying quite a lot every few weeks. It doesn’t take too many of those sorts of occasions to make a real difference to our business.”

The website showcases a range of product under the Ch’i umbrella including Ginger Crunch which has proven a hit with consumers claiming it tastes just like the real thing, and the tangy Ginger Spiced. Ginseng & Ginger with 40% less sugar also remains a good seller.

However, one product released just a few weeks ago is taking the team by the greatest surprise and that’s Source - Naturally Alkaline Spring Water, which showcases an impressive pH of 9.7.

Independently tested, it’s at the top end of the pH scale for naturally alkaline water anywhere in the world. And unlike most other high pH waters globally available, Ch’i’s water is bottled entirely in its natural state, straight from their natural spring without chemical or mineral adjustments.

“We always knew there was something quite special about our water, with people asking for years if we would make it available in a bottle. The fact is it wouldn’t have worked five years ago, but more and more people are now ‘in-zone’ for the pH story.

“Currently there are some massive international claims being made about the health benefits of high pH water. Regardless, the greatest feedback we get about our water is that it’s soft and smooth, so we’ll take that.”

A few bars and restaurants stock Ch’i beverages but not as many as there were 15-plus years ago when Vodka brand 42 Below was launched with great fanfare, fronted by Kiwi entrepreneur Geoff Ross. Ch’i was in there too.

“42 Below adopted a popular cocktail from the Matterhorn restaurant in central Wellington called ‘Falling Water’ – our most famous cocktail yet. It went off and is still the stuff of many Ch’i fans Friday night drinks at home.”

As per the website’s demonstration video, Falling Water comprises of a long slice of cucumber (cut lengthwise), 42 Below Feijoa Vodka (poured over the cucumber), and topped up with Ch’i Original in a tall glass of ice.

Nicholls says partnering up with alcohol brands and getting into more bars and restaurants remains a possibility, describing Ch’i as a great mixer - complimentary with alcohol given the botanical elements and not so sweet.

When it comes to concerns about excess sugar in bottled drinks, previous long-time Ch’i owner, the late Adrian Went, was ahead of his time.

Thirty years ago, Went wrote to the Government of the day concerned that sugary beverages would become a real problem on society’s health. Refusing to use saccharin – the only non-sugar sweetener available at the time - he sought official approval to use Stevia leaf as a natural sugar alternative.

At the time the Ministry of Health advised against such a request. However, Ch’i got its wish eventually when United States authorities in 2008 recognised Stevia as safe for food and drink products, with New Zealand regulators following soon after.

While waiting 20 years for it to become a permitted ingredient, Ch’i mastered replacing sugar with Stevia, with its Original Herbal Sugar Free alternative becoming an instant hit for those wanting the same herbal blend but without the sugar.

As well as no synthetic sweeteners, Ch’i proudly displays a ‘Freedom List’ of industry ingredients often added to other branded drinks that consumers will never find in theirs. These include no synthetic flavours, added colours, or high fructose corn syrup.

“Looking at the 2020s, and when you consider society’s growing focus on selfcare and balance as well as its rejection for what’s not natural, Ch’i’s had a great head start and is well placed. In fact, we’re arguably three decades ahead of our time,” says Ray Nicholls.