Getting smarter at growing grass 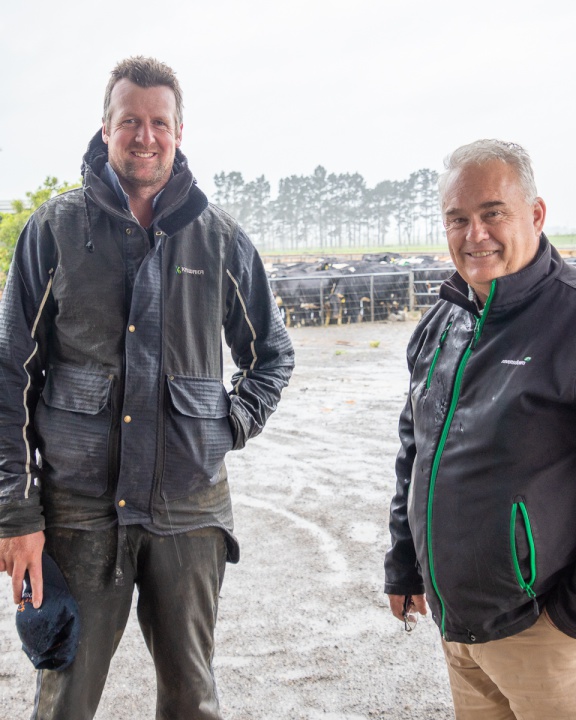 Trewithen is a 288ha farm with 1,100 cows in New Plymouth, owned by the Faull Family from Waitara. In his third season, sharemilker James Barbour takes us through the farm’s approach to nutrient management.

We cover a large area, so paddock variability is an important issue for us. If we just apply a blanket rate without testing or targeting, the costs mount up very quickly because of the scale of the operation.

We’re milking all year around with various winter run-offs. We have an ambitious target of 600,000kg MS. Our focus is on growing more grass, taking care of the animals and becoming increasingly efficient. And we’ve managed to cut our stocking rate while increasing production.

This is a very public farm just outside of town and on the main highway. The community rightly expects us to be on top of our game. We can’t afford to compromise cow health or environmental performance.

We’re putting 180 units of nitrogen on throughout the year. Volatilisation is a real risk when you’re not getting the rain at the right time. It’s one thing to be forecasting 10-20mm, but it’s another to get that amount coming down in this area, which is a drier part of Taranaki.

We have a large effluent pond and we use the effluent instead of fertiliser on a proportion of the farm. The soil tests enable us to check that the correct amounts are going on and if any extra is required, this can be applied as fertiliser. We do our own fertiliser spreading and have two Ravensdown silos: one for mixes and one for coated urea such as N-Protect. Part of our product policy in the summer is to switch to N-Protect as it starts warming up. With less being lost, we can put on lower rates of N and there’s definitely a potential saving in there.

We organised all-paddock testing with Ravensdown when I started so we knew what needed to go where. It was a week from soil testing until maps and plans were received and we have done it twice now which gives us great paddock fertility information. It is an upfront cost, but it’s been recouped.

Recording tests and spreading data in the HawkEye software tool is helpful. Seeing paddock history helps us to get the best out of each one. HawkEye also allows the owner to feel like he can stay in touch by seeing those actions being taken from anywhere in the world.

By walking the farm, we can see the ‘hungry paddocks’ which generally match pretty well to the soil test results. Spreading our own fertiliser enables us to leave out the areas which don’t need fertiliser such as around troughs, gates and the like.

There’s pride in the environmental efforts like the riparian strips and the 1,500 trees planted near our run-off areas. We organise plenty of school trips and have the odd high-profile guest come to look around.

Being in the third year out of five is the sweet spot where we know what works and are making little changes. The trust and relationship with the owner is vital. I have a great partnership with my brother-in-law Jason Groot. It’s all about progression - getting better at what we do. The goal is to keep learning with a view of farm ownership one day.

The farm benefits from the strong support of Ravensdown’s James Livingston. He’s really easy to work with – everything is planned. For example, we’ll talk about which paddocks to plant maize or other crops in and, as the farm is on Hawkeye, we can look at the maps online and discuss what needs to be done. If any paddocks need more testing, he just gets it done. Hawkeye also captures the paddock areas and fertiliser history which all help with decision making.

James always has everything well planned - frequently it’s just a matter of texts and phone calls to sort out what is happening.

In drier areas like coastal north Taranaki, and the pressure coming on for more environmental efficiency, N- Protect is a great tool for controlling N loss from volatilisation. As the climate changes and becomes drier and warmer, using it all year round needs serious consideration.