Papal pints pub placed on the market for sale 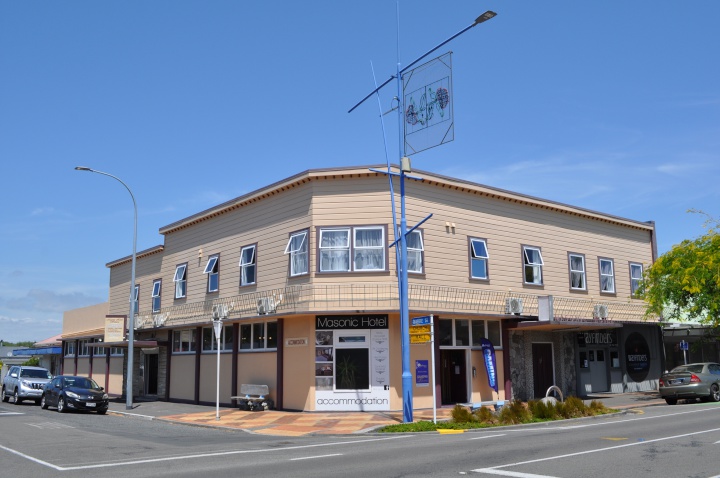 A classic Kiwi country pub formerly named after The Pope’s private residence in Rome has been placed on the market for sale.

The Masonic Hotel in the Taranaki township of Waitara was previously known as The Vatican when it was owned in the 1970s and early ’80s by staunchly Catholic publicans Michael and Eileen Fahy.

Built in the 1880s when there were originally three drinking establishments in Waitara, the two-storey Masonic Hotel is now the town’s only remaining pub. Its rivals have long since gone – with The Bridge and The Waitara hotels having burnt down in 1883 and 1906 respectively, and while both were rebuilt, their replacement entities have both been subsequently demolished.

By default, The Masonic is now the town’s main public hospitality venue – offering dining and drinking options, as well as accommodation. The Masonic land, building, and going concern business all at 9 Maclean Street are now being marketed for sale for $795,000 through Bayleys Taranaki.

Salesperson Alan Johnston said the 923 square metre hotel premises sat on some 1,528 square metres of land. Included in the corner-site location was the hotel’s adjoining former bottle store – which added another 237 square metres of floorspace to the business-zoned block.

Mr Johnston said The Masonic’s hospitality service options were spread across three separate licensed environments – the lounge bar and eatery known as Our Little Secret, the public bar, and the daytime cafe space known as Wayfinders Eatery which opened in 2017. The business is also licensed to run 18 gaming machines through the Southern Trust.

Accommodation amenities at the hotel were expanded and modernised in 2014 - with the guest room inventory now featuring eight bedrooms – configured into seven double bedrooms and one triple bedroom. All rooms have ensuite bathrooms. The property also has a self-contained one-bedroom staff/owner-managers residence currently utilised by one of the venue’s managers.

Nightly rack rates for the hotel’s rooms range $105 to $140 inclusive of breakfast. The property runs at an average occupancy rate of 30-35 percent.

Mr Johnston said there were multiple growth opportunities for any new owner of The Masonic to increase not only the breadth of service offerings, but also revenues. The hotel’s bars operate seven days a week from 10am. The business employs five full-time staff and part-time staff.

“The café for example currently only operates five days a week from 7.30am to 3pm. With the right chef in the kitchen, this could easily be expanded into offering evening meals - and running that over seven days,” Mr Johnston said.

“There is a dearth of stand-alone restaurants in Waitara outside of the chartered clubs – resulting in the town’s residents having to drive to Inglewood or New Plymouth for eating options outside of the takeaway shops. That is such a shame when you consider how prolific the likes of seafood delicacies such as whitebait and crayfish are in rivers and coastline surrounding Waitara,

“Additionally, any new owner of the site has the option of either integrating the former bottle store into the wider hospitality operations, or leasing it out to derive rental income.

“ The property has no wheelchair accessible accommodation rooms. and could be developed into either another 4 downstairs guest rooms , or as a venue for functions, adding sliding doors into the carpark, would often mountain views, with a courtyard added, would provide a private venue ideal for conferences or weddings.

“Alternatively, some of the space could house a relocation of the Masonic’s gaming amenities to allow for a modernising redevelopment of the main bar area.”

Mr Johnston said that undertaking structural work on the building would open up even more options for its future direction.

“Upstairs, taking into account the low occupancy rate, one or more of the guest rooms could be reconfigured into additional staff accommodation as an adjunct to any employment package,” he said.

“Meanwhile at street level, the installation of sliding French doors in conjunction with remodeling the decore of the existing main bar would create more of a modern bistro-style drinking and dining environment – moving away from the ‘country boozer flying jug’ stereotype of the 1950s and ‘60s, and attracting more of a family clientele.

“The classic case-study for this is of course the Twin Pines Manor country hotel near Paihia in the Bay of Islands which in the space of the last 12-months has seen a derelict pub completely brought back to life to now become a vibrant centre of activity for the surrounding community. Likewise with the Theatre Royal in the Westland town of Kumara.

“The Masonic Hotel could do the same for Waitara’s economy and community spirit – sustained by a potential catchment area spreading south to the Bell Block suburb of New Plymouth, and north to the rural settlement of Urenui. With the right interior decore, product offering, and marketing, the Masonic could once again be a beautiful Kiwi country hotel that becomes a destination.”