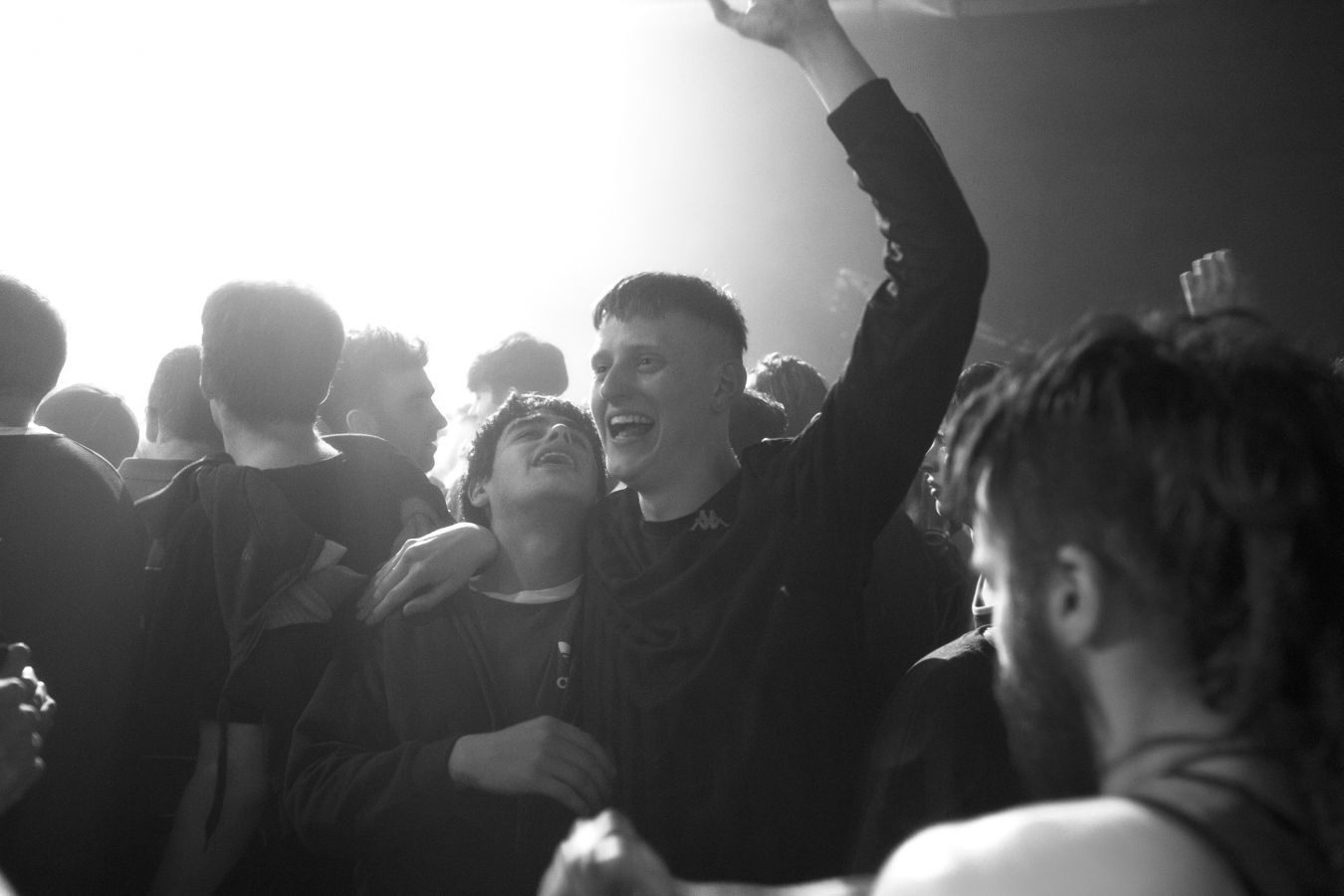 ”Out on the floor each night, I'm really moving / The chicks are out of sight and I'm a-grooving ... Out on the floor tonight, I feel like singing / The beats are light and bright, guitars are ringing.” - Dobie Gray, Out on the Floor.

The recent premature demise from a pulmonary embolism of veteran British music mixer and producer Andrew Weatherall (whose unbending idiosyncrasy as he took acid house into the mainstream earned him the nickname “The Guv’nor”) presents an opportune moment to re-evaluate the ecstasy-fulled rave scene that dominated UK dance floors during the 1980s. As a DJ, Weatherall was equally at home playing a rapturously-received guest slot at London’s Horse Meat Disco as he was playing what he colourfully termed “absolutely full-knacker, proper panel-beaters-from-Prague-’ere-we-go techno.” The ranks of Britain’s acid house pioneers were largely composed of Northern Soulboys from Wigan's Empress Ballroom and Palais de Danse, but Weatherall was also a big fan of dub reggae and industrial music. “I went from listening to United by Throbbing Gristle to dancing in a field to Josephine by Chris Rea,” he recalled of 1988’s MDMA-infused 'Second Summer of Love,' “which gives you some idea what a powerful drug ecstasy is.” Decades later, however, he deflated any rose-tinted remembrances of the era by noting that when Boy’s Own attempted to stage an Ibiza-style foam party, they did it in a ramshackle barn, with the unfortunate result that dancers were engulfed in foam-flecked lumps of cow dung.

In 1999, Human Traffic (born of the same creative big bang sponsored by the BFI that gave birth to both Trainspotting and Kevin and Perry Go Large) caught the tail end of the rave culture in which Weatherall and fellow mix-masters like Paul Oakenfeld played such a central role. Two decades later, Brian Welsh’s rollickingBeats revisits similar territory, this time composed in silvery greys, with contextualising clips of Tony Blair outlining his vision for a New Britain, now a dimly dispiritng memory for many of us. Co-produced by Steve Soderbergh, based on Kieran Hurley's 2012 play, and lovingly shot on grainy monochrome film stock by Ben Kracun, Welsh has fashioned a domestic kitchen-sink drama from a largely al fresco youth phenomena. Beats is both a coming-of-age tale and a movie about endings. The backdrop is the disappearing tail of the illegal rave scene, which eventually succumbed to the twin-pronged nemesis of Blair's Criminal Justice and Order Bill and club entrepreneurs who turned an act of adolescent rebellion into a commercial industry. Welsh caustically depicts the false optimism of the New Labour dream by stitching together snippets from news bulletins which uncannily presage the kind of national disillusion and disintegration that Brexit buffoons have formented more recently.

Beats also investigates the inevitable burnout of a friendship between a frustrated live wire and his more subdued running buddy. Johnno (Cristian Ortega) is moving to a better part of town, while his beguiling mate Spanner (Lorn Macdonald) remains stuck in a health hazard of a flat with his abusive older brother Fido. Theirs is a bond forged on a mutual admiration for the kind of exuberantly banging techno that only teenage boys can truly dig and their biggest aspiration is to attend a rave together. This simple narrative arc is coupled with an honest and earthy sense of humour, illuminated by a truly trippy animated colour sequence that perfectly captures the joyful abandon of a crowded dance floor. It includes scenes in which the two teens confront other’s courage, others when they form a cosily co-dependent “dream team and that,” and a few when they veer into more uncharted and emotionally complex terrain. Beats thrives on the ambiguity of a bigger-than-life relationship between an introverted and impressionable teenager and his ruffian neighbour as they prepare for a night of partying that may well tun out to be the final rave on their mid-Lothian turf. It thrums with an unbridled energy that owes less to the massive freak-out in which it culminates than to the latently homoerotic relationship between two lost souls who gleefully plunge into it.

The year is 1994 - a time when TV commercials promised new cars and real estate projects, and hypocritical politicians like Blair railed against the country’s “culture of drugs and urban squalor,” before introducing his new law banning all unlicensed public gatherings “characterized by the emissions of a succession of repetitive beats.” The UK’s independent rave scene is rapidly collapsing, as is Johnno's world. His policeman stepfather (Brian Ferguson) has convinced his impressionable mother (Laura Fraser) to relocate to suburbia (or “happy-clappy plastic land”, as Spanner dubs it), where the fortunate few can lead safely semi-detached lives in semi-detached houses. This decision threatens to curtail the aimless afternoons they spend listening together with religious fervour to the techno hits played on a local pirate radio station by DJ D-Man (Ross Mann), a dreadlocked amalgam of American Graffiti’s Wolfman Jack and Philip Seymour Hoffman in The Boat That Rocked.

“Rave to the Grave!” D-Man bellows from his mike, calling for all local partygoers to defy the new restrictions and head to a secret location for a terminal night of epic raving. It is the sort of tantalizing opportunity that Johnno and Spanner normally only hear about from a distance. Welsh portrays the underground scene as the run-down by-product of unfettered capitalism packed with quirky characters and extracts wonderfully naturalistic performances from his cast. Ortega and Macdonald dive into their roles with all the gob-smacked reverence we might expect from two naive schoolboys when faced with an adults-only world of taboo thrills. Ortega portrays Johnno with eyebrows permanently furrowed in an instantly relatable 'what-am-I-doing-here' attitude, while Macdonald possesses an uncanny ability to undercut every bombastic display of swagger with a poignant vulnerability.

Beats only really starts to overflow with contagious adrenaline after D-Man warns the boys that “this is not just a rave,” but Beats is not simply a blissed-out party film, rather an anguished depiction of teenage angst and ennui, inflected with ferocious sociopolitical anger. D-Man may seem to speak in tongues, but his tirades against the pigs invest his critique of the surveillance state with curious echoes of Michel Foucault. “To be noted is to be registered,” he rants over the airwaves, before railing against bureaucratic efforts to privatize young people’s lives. If the manner in which Johnno’s parents shun Spanner as “scum” appears over the top, it is because Welsh casts a jaundiced eye on the class differences that their friendship acknowledges, but never successfully overcomes. The prospect of his family's looming move may well rock Johnno’s world, but he is moving on with his life, while Spanner seems doomed to council estate oblivion. Abused by his violent older brother and apparently parentless, he is merely a reflection of the humiliating circumstances in which he has been raised and the real affection he feels for Johnno, who describes him somewhat implausibly as “the smartest guy you’ll ever meet.” Both boys are painfully aware that the limited universe Spanner inhabits has already relegated him to its margins.

One of the film's limitations is that it pivots around a customary odd-couple pairing, as our cowed hero and his mum are about to be installed in a New Build home on the outskirts of their unidentified Scottish town, in part to separate the impressionable lad from his wayward pal. The scenes in which they fall in with an underwritten older crowd remain stubbornly theatrical, stranding us amid empty car lots, squalid squats, and abandoned swimming pools. For half of its brief running time, Beats is all about class structure and social oppression. There is a lot of deliberately cramped camera framing, presumably in order to reinforce the confined and constricted conditions in which these families exist, and a curious absence from the soundtrack of the period’s biggest hits, possibly due to the high cost of licensing them. The movie also gets a bit flabby around its middle, requiring a raid by armed rozzers to provide a suitably eulogistic conclusion, while the idea that all our problems can simply be obliterated on the dance floor is risibly implausible. Compared with Mia Hansen-Løve’s resonant drama Eden or Michael Winterbottom’s hysterical 24-Hour Party People, these beats sound distinctly tinny, designed mainly for aurally unsophisticated members of the earbud generation, and Welsh's somewhat shambolic romp is more pleasantly amiable than amusing, or even particularly persuasive. He is much more interested in depicting the grim consequences of indulging in acid house’s saucer-eyed excess than entering juvenile High Fidelity territory. Nevertheless, a handful of exuberant images linger, like the sight of the lads dancing around their separate bedrooms in their matching tighty-whities and the extended colour sequence which is as utterly convincing as anything in Ken Russell's Altered States.

Thrumming to album cuts assembled by Glasgow DJ Twitch from such iconic bands as The Prodigy and Detroit’s Belleville Three, Beats fizzes with all the bittersweet soda sadness of a faded seaside postcard, a romantic relic from a bygone era. Much like Franc Roddam's Quadrophenia, which cast a similarly acerbic eye on Pete Townsend's tale of the vicious rivalry between Mods and Rockers during the early 1960s, it is a highly engrossing and entertaining exercise in cultural nostalgia. Watching Johnny and Spanner as they nervously make their way to the party jolts us back to a more innocent era, an idyllic hiatus of messy uncertainty when weekend nights-out could still assume the status of legendary lifetime landmarks. “It’s a scene that’s been done before anyways,” the anxious Spanner mutters to Johnno, vainly angling at the last moment for a valid excuse not to join the horde of ravers shuffling past them. With its enlightened DJs, sibling rivalries, inter-generational squabbles, and broken bromance, Beats not only assumes its rightful place in a long line of coming-of-age movies, from George Lucas’ American Graffiti to Richard Linklater’s Dazed and Confused, but also maintains its own distinctly Scotch accent. Watching the vast crowd of euphoric party people prance around to the pulsating beats, their arms flailing overhead and eyes gleaming with hallucinogenic happiness, we vicariously experience both the intense joy and desultory despair of being callow teenagers once again.