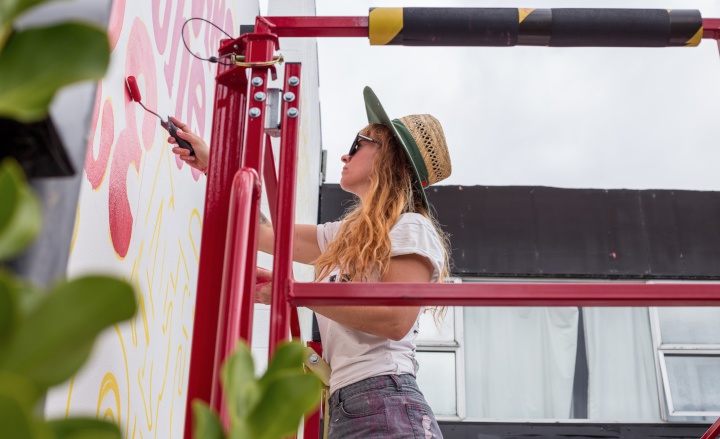 Making a splash: Kiwi street artist, Kelly Spenser, will be painting a transformative piece on Victoria St as part of the BOON Street Art Festival in March.

Eight national and international artists will be painting the town red, and a few other colours, during the fifth annual BOON Street Art Festival in March.

The street art festival, which to date has enabled 38 artists to create 43 murals since its establishment in 2015, is set to make bright and beautiful waves across Hamilton City during the three-day festival.

BOON Street Art Festival Director, Craig McClure, sees the vital impact of the festival for the community and the region as a whole.

“We want to see art everywhere, every day,” says McClure.

“It’s so important for everyone to have free access to powerful, beautiful art because a beautiful city makes happier people and a safer place.”

From 6 to 8 March BOON will not only make the city more colourful, but will bring to life stories of the people and places of the Waikato. McClure and his team have been intentional about matching the right artist with the right wall in order to use each space as a platform for storytelling.

A collaborative piece by local artists Kelly Spenser and Michael Moore will see the façade of 586 Victoria St read, “Where her river bends bloodline and time tether in the hands of chiefs.” Words which honour whenua, serve as a reminder of mana, and nod to the Waikato whakataukī, ‘Waikato taniwha rau, he piko, he taniwha, he piko, he taniwha’.

Other artists from around New Zealand include Kieran Horner, Erica Pearce, Poihakena Ngawati, and Hana Maihi. International artists Tony Diaz from California and Peter Robinson from Seattle completing the lineup.

Since the festival’s inception McClure believes it has grown from strength to strength.

The public will have a chance to follow a street art map around the city, see works unfold, and engage with artists and other arts spaces and events.

Adding to the transformative experience of the festival is a BOON Street Art exhibition featuring original work by BOON artists, the Mesoverse immersive artist space, and CBD talks and live music.

“Thousands of people see the artists’ work during the weekend then for a further 10 to 20 years after the festival.

“Each piece becomes taonga for the city and something we can all be proud of,” says McClure.

“We’re incredibly grateful to the key Hamilton people and organisations who love this city and want it known for having great art.

The festival runs from 6-8 March with the festival hub and exhibition space open from 10am to 5pm time each day.