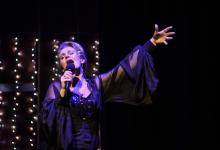 Following hard on the heels of her previous hit show The Look Of Love, which focussed on the songs of Burt Bacharach and Hal David, Christchurch chanteuse Ali Harper has embarked on another nostalgic musical ride, this time covering the songs of Carole King, who churned out dozens of Top Twenty songs with her writing partner and first husband Gerry Goffin, including Will You Still Love Me Tomorrow and (You make me feel like) A Natural Woman.

College sweethearts who married in 1959 when he was twenty and she was seventeen, they went on to write such hits as Take Good Care of My Baby, The Locomotion, Go Away Little Girl, One Fine Day for the Chiffons and Pleasant Valley Sunday for The Monkees. They were one of the most prolific and successful songwriting teams in the Brill Building, producing hit after hit for artists like The Drifters, The Shirelles, Little Eva, Herman’s Hermits, Aretha Franklin, James Taylor, and Celine Dion, among many others.

John Lennon was quoted in 1963 as saying he wanted Paul McCartney and himself to become "the Goffin-King of England,” but they divorced in 1969. In a Vanity Fair interview Goffin said that he "wanted to be a hippie - grew my hair long - and Carole did it modestly ... Then I started taking LSD and mesculine and Carole and I began to grow apart because she felt that she had to say things herself. She had to be her own lyricist.” According to King's memoir, Goffin suffered from mental illness following ingestion of LSD, eventually undergoing treatment with lithium and electroshock therapy, and was diagnosed with manic depression.

As the center of the record industry shifted from New York to Los Angeles during the 1960s, King moved to California. She hung out in Laurel Canyon with James Taylor and Joni Mitchell and produced her first solo album Writer in 1970 for Lou Adler’s Ode label. Taylor played acoustic guitar and provided backing vocals, but it peaked at 84 in the Billboard Top 200. The following year King released Tapestry which held the Top Album spot on the charts for fifteen consecutive weeks, won four Grammies, and appeared on Rolling Stone’s 500 Greatest Albums of All Time at number 36.

A graduate of Toi Whakaari: The New Zealand Drama School, Harper has starred in numerous musicals and plays throughout New Zealand, including such staples as Blood Brothers, Mamma Mia, Legally Blonde, My Fair Lady, Mary Poppins, The Sound of Music, Guys and Dolls, South Pacific, A Shortcut to Happiness, Side by Side by Sondheim, Calendar Girls, Jerry’s Girls, The Rocky Horror Picture Show and Tell Me on a Sunday.

Tours across Aotearoa also include roles in the stage musicals Chess, Evita, Pirates of Penzance, Oklahoma and the one-woman play Bombshells, for which Harper was awarded ‘Best Actress’ in New York in 2014 and ‘Chapman Tripp Best Actress’ in Wellington in 2008. She has performed her cabaret show A Down Under Diva at Don’t Tell Mama in New York, as well as the Metropolitan Room in 2013 and 2014, while the Court Theatre production of the her show Songs for Nobodies won ‘Best One Woman Show’ at New York’s United Solo Festival in 2018.

Pre-Covid, Harper was a regular fixture as guest entertainer on cruise ships and following the Christchurch mosque shootings in 2019 she wrote the single Release Our Love, with proceeds going to the Victim Supports GiveaLittle page. Her six albums are The Look of Love, A Doris Day Special, Legendary Divas, Naughty and Nice, Songs for Everybody and Something So Right. Harper is also a Hansa qualified yoga teacher who teaches both privately and leads yoga-focused wellness retreats.

With standout tracks like I Feel The Earth Move, It’s Too Late, So Far Away, and You’ve Got A Friend, Tapestry still stands the test of time. Ably accompanied by her understated, but more than capable backing band (Nick Granville on guitar, Francis Meria on piano, and Scott Maynard on bass), Harper’s show really comes alive when she is joined by guest vocalist Frankie Leota, who provides some welcome harmonies and even gets to perform her own King song, accompanied by Harper on piano.

But it is Harper’s warms and intimate delivery, interspersed with a few fascinating biographical details, that sends wistfully evocative tingles up and down the spine. Her latest show runs until 19/2 at Circa Theatre in Wellington and at Christchurch’s Piano Center for Music and The Arts from 25-27/2. Audience numbers are limited, so book your tickets now. They’re selling fast …