Through The Maze – Accessing Social Housing In Aotearoa New Zealand 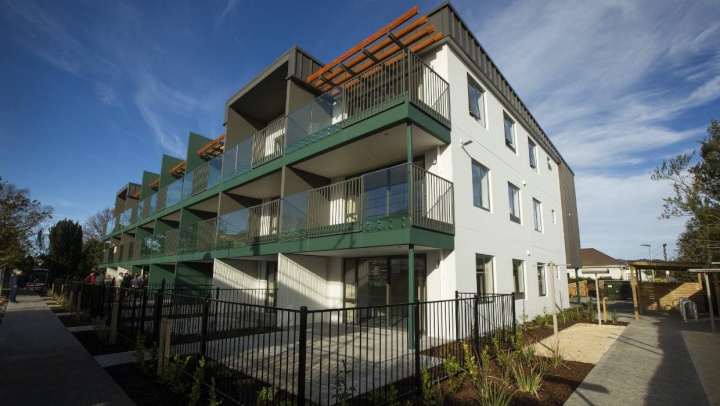 A Housing NZ complex in Christchurch

As of March 2021, there were 23,688 applicants on the waiting list for social housing in NZ, an increase of 45 per cent from the same time last year.1 To qualify for social housing, you must be a New Zealand citizen or permanent resident, or recognised as a refugee or protected person by Immigration NZ; and in most cases have income under $655.41 per week after tax if you are single with no dependents, or $1008.33 after tax if you have a partner or children. You must also be considered to be in “serious housing need”, a category which is decided by Work and Income, which took over the assessment of social housing eligibility from Housing NZ in 2014.2 (In 2019, Housing NZ was merged with its development subsidiary HLC and the Kiwibuild Unit from the Ministry of Housing to create Kainga Ora - Homes and Communities).

Behind the statistics, there are thousands of people who are being forced into substandard living conditions and unaffordable rentals due to the interpretation of “serious housing need” by Work and Income. Those who are lucky enough to be considered in serious housing need face months of waiting in emergency accommodation, mostly in motels which are not intended to be long-term living situations.

As a community social worker in South Auckland, a large portion of my work involves helping people through the confusing maze of applying for social housing. The people I work with are Maori, Pasifika or recent migrants. They are either on benefits or low-paying and insecure jobs. Typically, they have large families which often include parents or other relatives. Many do not speak English as their first language. There are often health issues, intimate partner violence and breakdown of family relationships, and a reluctance to discuss these issues with strangers. When a family or individual contacts our agency, they are often at a crisis point. They may be a woman and her children escaping a violent partner, or a family who have been living in overcrowded accommodation with relatives who have told them to leave. They may also be a young person who has been kicked out by family because of pregnancy, sexuality or resisting strict parenting.

People in emergency accommodation are told to look online for properties, regardless of whether they have access to the internet or know how to use it. They are expected to view properties even if the rent is unaffordable. Pressure is often put on people to apply for rental properties that are unaffordable or substandard. A colleague of mine recently assisted a sole parent who had been pressured by Work and Income into taking a rental costing $700 per week, which was cold, damp and had holes in the walls and other damage.

Once people take a rental, they are taken off the social housing waitlist because they are no longer considered to be in “serious housing need”. One of the families I work with was encouraged by Work and Income to take a private rental property which was not adequately heated, after the landlord promised to install a heat pump. Several months later, the heat pump has still not been installed and the couple’s young child is getting sick and has been hospitalised several times with bronchiolitis. When we tried to get the family back on the social housing waitlist, they were declined because they were in the rental property. A roof over your head is considered sufficient, unless you are about to be evicted or someone is seriously ill.

For those who stay in emergency accommodation, the next step is transitional housing. Transitional housing is run by social housing providers which are contracted to the Ministry of Social Development. There are a number of transitional housing complexes in South Auckland that are purpose-built with a good standard of accommodation of varying sizes, however, some are motels that have been leased or purchased by the housing provider and are not always well-maintained. Transitional housing is provided for 12 weeks and often longer. The provider is meant to provide a “wrap-around” service to help families to either move to social housing or private rentals. The reality is that many providers struggle to provide the help that is required, due to staffing shortages and the sheer volume of numbers they are working with, who frequently have complex needs.

Another issue with both emergency and transitional housing is the restrictions on visitors. While accommodation providers need to ensure the safety of residents, young people particularly find the restrictions difficult as they want to socialise with friends and family; and the need for Maori and Pacific families to maintain whanau and family connections is also undermined.

Faced with this obstacle course of finding permanent accommodation, many people just give up and remain in substandard conditions, sleeping in garages and living rooms, living in cars or vans, or couch-surfing around friends and relatives.

While the number of homes being built by Kainga Ora has increased under Labour, it is not enough to meet the need. Many of the new builds are medium-to-high-density apartments and townhouses, which are not adequate for larger families. Accessible housing for those with disabilities is even harder to find.

The housing situation in Aotearoa New Zealand is beyond crisis - it is fundamentally broken. It is the result of years of neglect and ideological opposition to public housing, combined with structural racism and neoliberal capitalism. As described elsewhere in this issue by Ani White, the concept of housing as an investment rather than a human right has not been challenged in any real way by Jacinda Arden’s government.

The first Labour government responded to the housing crisis of the 1930s by a massive building effort that also created jobs for those made unemployed by the Depression. There is no reason why, with new technologies available, that many more homes could not be built now, and that these homes would be environmentally sustainable, good quality and provide options for single people, smaller families, larger families and multi-generational households. The only reasons that this is not happening is the reluctance of the Labour government to do anything that might upset the wealthy property developers and slumlords, and the absence of a mass movement that can pressure them to do so. There are a number of reasons why this hasn’t occurred - the disruption caused by Covid19, the overwhelming demands on housing services, and in some cases, reluctance to upset the government that provides funding for organisations providing housing services. Hopefully these barriers to demanding a massive increase in public housing and rent controls on private rentals can be overcome.

2MSD, “Who can get public housing” https://workandincome.govt.nz/housing/find-a-house/who-can-get-public-housing.html

The author is a social worker working for an NGO in South Auckland.

CPay Cheque To Pay Cheque: Half A Million New Zealanders Have No Savings
New findings from the Consumer NZ sentiment tracker found that 15% of New Zealanders had no savings, and a further 27% were anxious about their level of savings and would like to have more tucked away... More>>