The land and building comprising a regional outlet for one of New Zealand’s best-known men’s fashionwear stores has been placed on the market for sale. 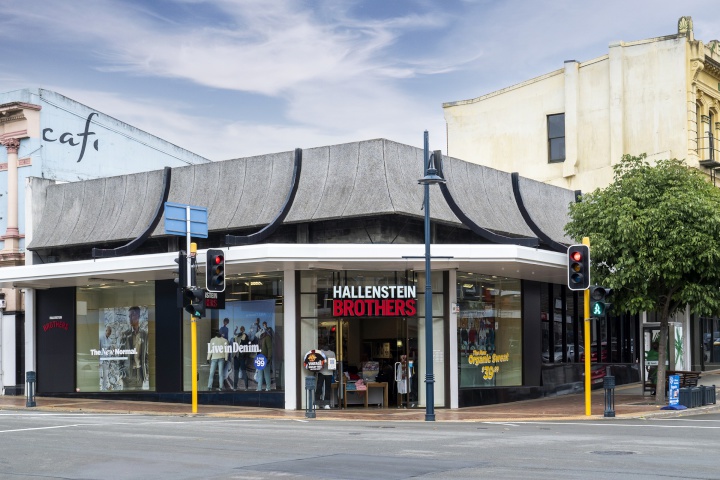 The property at Stafford Street in Timaru is home to clothing retailer Hallenstein Brothers which has been on the site for 22 years - sitting directly on the intersection of Church Street in the city’s main retail precinct with its high foot traffic and vehicle traffic flows.

Originally built for Westpac Bank in the 1970s and occupied by the bank until the late 1990s when it relocated, the Stafford Street premises was consequently refitted into a retail format to meet Hallenstein Brothers’ open plan requirements. The premises is zoned commercial 1A under the Timaru District Council plan – a classification which strongly promotes retail activity.

Along with the Timaru outlet and locations in all New Zealand’s major metropolitan centres, Hallenstein Brothers has a vast regional presence – with shops in the likes of Blenheim, Gisborne, Tauranga, Hastings, Queenstown, Invercargill, Palmerston North, Rotorua and Whanganui, totaling more than 40 shops.

Now the 370-square metre building sitting on some 297 square metres of land at 228 Stafford Street has been placed on the market for sale by deadline private treaty through Bayleys Timaru, with offers closing on June 9.

Hallenstein Brothers is currently on a net lease running through to 2023 with a further five-year right of renewal, generating annual net rental of $94,168 plus GST. The single-storey building, with a mezzanine floor, is constructed of concrete framing with steel truss roof, while the walls consist of masonry blocks.

The property has a new building standards rating of 86.9 percent, and enjoys flat access from the pedestrian-friendly Stafford Street footpath frontage. The mezzanine level of the building contains staff amenities – including a lunchroom and bathrooms.

Parry said the Stafford Street precinct in which the Hallenstein Brothers building was located, had been highlighted for special mention in Timaru District Council‘s Long-Term Plan 2021–2031 - particularly focusing on the Caroline Bay locale through to the heritage hub at the southern end of the road.

“The council has identified three development options for this area, focusing on themes of ‘regeneration’ and ‘transformation’ designed to improve the look and feel of the inner-city public spaces over a 10-15-year time frame,” Parry said.

“Additional sustainable and enduring proposals within the plan include the creation of one-way traffic flows in Stafford Street. This long-term confidence in Timaru’s central business district underpins the value of 228 Stafford Street as a retail property, and amply justifies why so many national retail brands are located along the road - taking advantage of the pro-shopper free one-hour parking bays.

“The building’s presence - with character structures on either side - is further enhanced by occupying a corner site - giving profile along two roads and enabling high visibility signage to be utilised by Hallenstein Brothers as the sole tenant.”

Parry said that after owning the property for some 22 years and maintaining its structure and services to a high standard throughout that period, its owners were now retiring and freeing up their assets.