Calm in the North, Wet And Windy for the South

MetService is forecasting the cold and windy start to the week to make way for a fine weekend for a lot of Aotearoa, albeit quite windy in spots. Northwesterly winds will bring a return to summery temperatures.

The week started off with a quite cool Southern Ocean intrusion with very strong winds. The winds have pulled back with every passing day, allowing the temperature to slowly return to more normal values for January.

Friday looks to be mainly fine for most of the country and it’s on Saturday that northwesterly winds will start to impact our shores with rising temperatures forecast for eastern areas of the South Island. These warmer temperatures will be seen again on Sunday for some spots with eastern North Island also getting a taste of the heat.

“The northwest flow over the weekend is forecast to bring heavy rain to the West Coast, strong winds to a lot of central and southern Aotearoa while eastern areas see above average temperatures,” informs MetService meteorologist Lewis Ferris.

“Attendees to the ASB Classic in Auckland will be treated to some fine weather over the weekend with Auckland forecast to reach 23°C and 25°C on respective days,” says Ferris.

For the North Island a ridge of high pressure keeps the wet weather at bay and a mostly fine weekend is on the cards – the fly in the ointment will be the strong northerly winds through southern parts of the island.

The rain band that affects the South Island through the weekend brings heavy rain to western areas while some eastern areas get battered by gale northwesterlies. There is risk of severe weather so make sure you remain up to date with our latest severe weather forecasts throughout Friday and the weekend.

Jumping ahead into next week we see some brief shower activity on Monday and Tuesday but on the whole it looks like a relatively settled week. 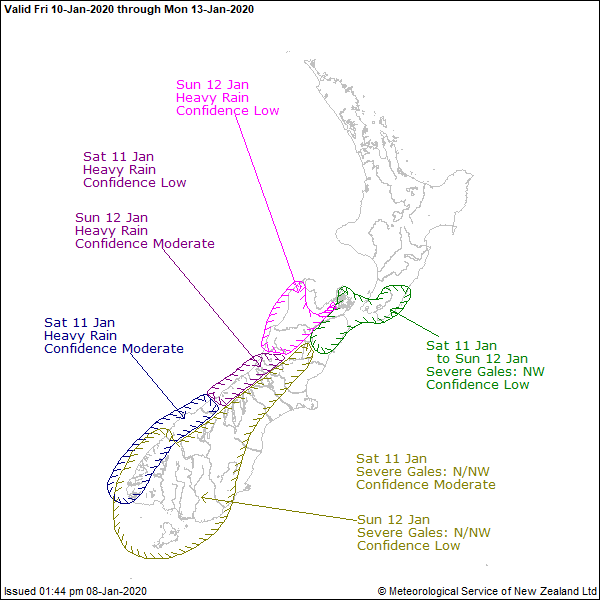 The coronavirus – its official World Health Organisation designation is 2019-nCoV – is believed to have originated as a seafood-to-human transfer, with ground zero for the transfer believed to have been a fish market in Wuhan, China. The coronavirus is part of a family of viruses. That family includes everything from the common cold to more deadly examples like the Severe Acute Respiratory System (SARS) virus of 2002-2003, and the Middle East Respiratory System (MERS) outbreak that occurred in 2012. More>>