Warm Start To The Week With Rain At Times

The unsettled weather which started over New Zealand this weekend is set to persist into this week. MetService is forecasting a series of fronts will move over the country this week with less than a day’s break from either strong winds or rain for many.

MetService meteorologist April Clark states: “The westerly flow bringing in humid air, means any fronts moving over the country this week will be ripe for rain, and this pattern will dominate through to Friday.”

Each front will bring a period of rain to regions exposed to the west, with lesser amounts in the east. Winds are also expected to pick up with the passage of each front, especially over the high country with Wellington’s break from gale force winds set to be broken on Thursday when an active front moves up from the South Island.

“17°C overnight for Auckland on Tuesday is almost bang on the average daily high temperature for May, and is a marked change from the low single digits of last week.”

An active front is expected to move over the country on Thursday, marking the start of a gradual shift to southwesterlies and cooler temperatures. Eastern regions of the South Island will likely see the sharpest drop in temperatures from the week’s start to end, with single digit maximum temperatures showing up for Southland and Otago on Friday.

Unsettled weather means changeable weather so it becomes even more important to keep up with the details of the latest Severe Weather Warnings and your local forecast as the weather you wake up to each morning is unlikely to be the same by afternoon. 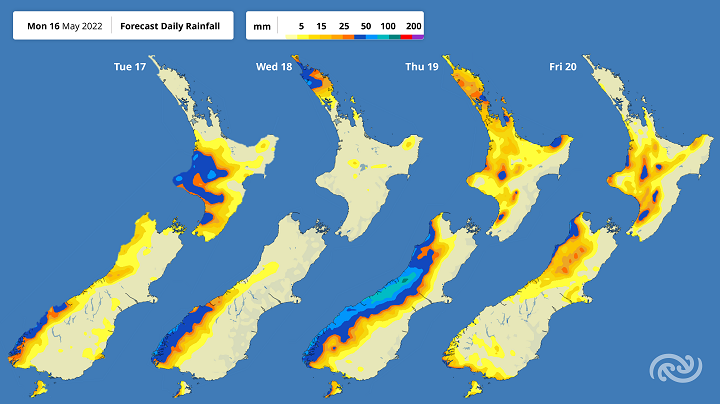