Celebrating 25 years of caring for our coast 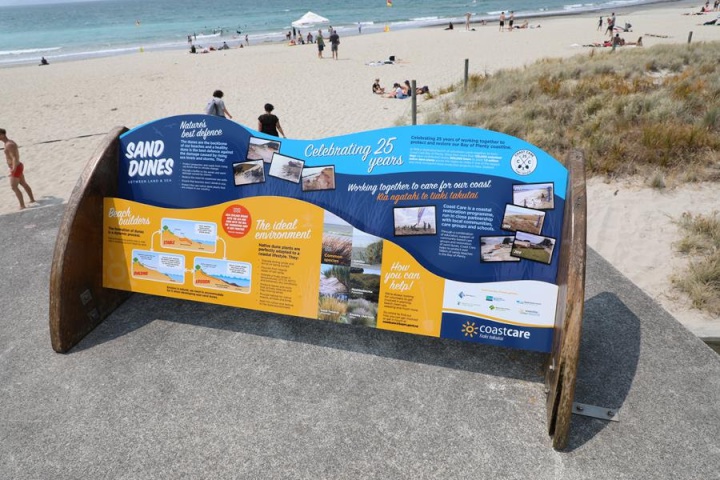 Volunteers and key supporters of the Coast Care Bay of Plenty programme celebrated 25 years of restoring and protecting our region’s sand dunes on Sunday. The occasion was marked by the unveiling a new commemorative sign by Bay of Plenty Regional councillor Andrew von Dadelszen at the Mount Maunganui main beach, followed by speeches from key Coast Care founders.

Paul Greenshields, Coast Care Regional Co-ordinator reflected on the significance of the day.

“In the past 25 years more than 300,000 volunteer hours have helped to plant 1.5 million sand dune plants across the Bay of Plenty region, making it one of the largest and most successful dune restoration programme in New Zealand,” he said.

The Coast Care Bay of Plenty group was formed in 1994 and early projects included clearing Sydney Golden wattle from the Mount Maunganui beach front and helping Waihī Beach residents restore the dunes after an ocean storm resulted in waves surging 80 metres inland. Since then the programme has grown and now helps look after and plant more than 156 km of coastline across the Bay of Plenty.

Mr Greenshields highlighted that central to Coast Care is a community-based partnership programme which connects local communities, care groups and schools from Waihī all the way around to the East Cape.

“Crucial to the ongoing success of Coast Care is the contribution made by volunteers,” he said. “Whether it’s individuals turning up for planting days, schools and kindergartens including dune restoration in their curriculum or businesses donating staff hours, Coast Care represents the epitome of people getting involved to make a difference.”

The coronavirus – its official World Health Organisation designation is 2019-nCoV – is believed to have originated as a seafood-to-human transfer, with ground zero for the transfer believed to have been a fish market in Wuhan, China. The coronavirus is part of a family of viruses. That family includes everything from the common cold to more deadly examples like the Severe Acute Respiratory System (SARS) virus of 2002-2003, and the Middle East Respiratory System (MERS) outbreak that occurred in 2012. More>>