People are advised to arrive early for Monday’s national memorial service to mark the 10th anniversary of the 22 February 2011 earthquake.

The service is being held at the Oi Manawa Canterbury Earthquake National Memorial and will be attended by the Governor General, Dame Patsy Reddy, and the Prime Minister, Jacinda Ardern.

With a large crowd expected, people are being encouraged to make their way to the north bank of the Memorial site, on the corner of Montreal Street and Cambridge Terrace, well before the 12.30pm start.

A large screen in a grassed area on the other side of Montreal Street will also show the service, which will be streamed live and remain available online.

Christchurch Mayor Lianne Dalziel says she hopes people who cannot be at Oi Manawa on Monday will join in remembering by watching online.

“This is the opportunity for us to reflect on the events of that day, 22nd February 2011, when 185 people lost their lives, and so many were injured or traumatised by what they experienced.

“We also want to give thanks to all who supported us at our time of need and to reflect on what that has meant for us,'' Mayor Dalziel says.

Christchurch City Council has worked closely with the Quake Families Trust on the programme for the service, which will include a minute’s silence at 12.51pm, the exact time the magnitude-6.3 earthquake struck.

The names of the 185 people killed in the earthquake will also be read out during the service.

See the full Order of Service.

Montreal Street – from Tuam Street to Cambridge Terrace – will be closed to traffic from 9am to 4pm. The Memorial Wall will not be open to the public from noon until the end of the service.

For those planning on travelling to the service by public transport, the Bus Interchange is only a 10-minute walk from the Memorial Wall. A parking area has been set aside for bikes.

People can lay tributes at the Memorial Wall or throw their unwrapped floral tributes in the Avon River following the civic service on Monday. 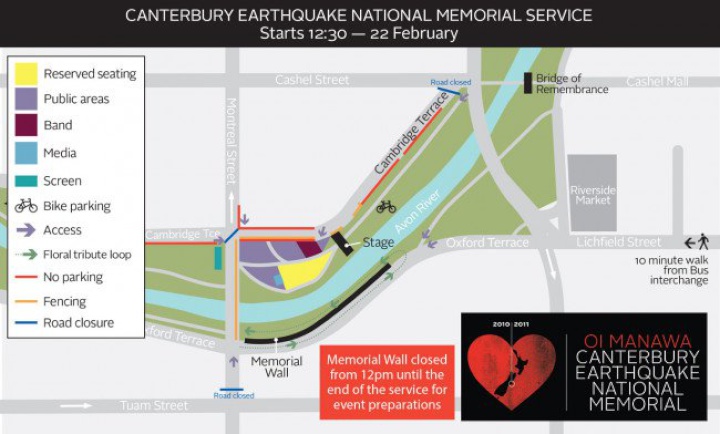