Showbiz Is Back! Buddy Cast Announced

One of the country’s leading musical theatre companies, Showbiz Christchurch, is back with their first show since the March 2019 Covid lockdown. 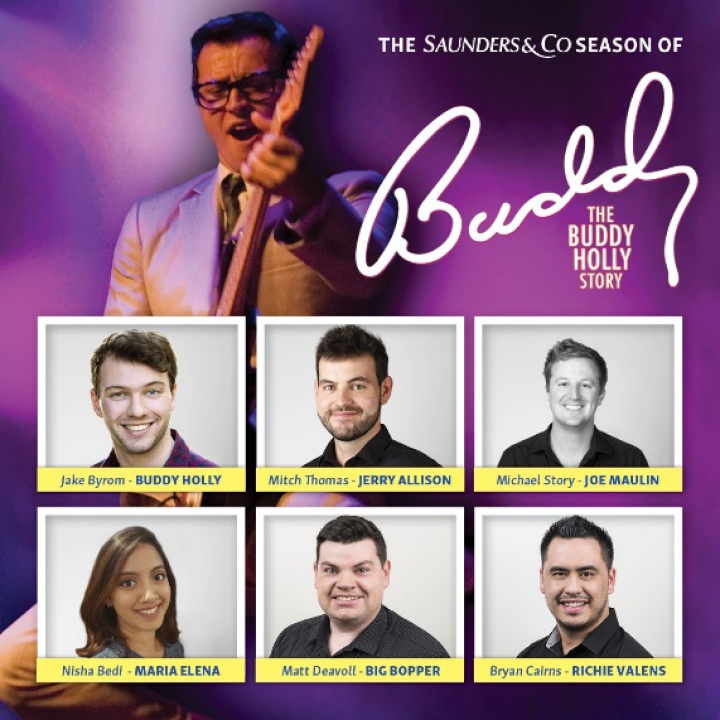 Rehearsals for Buddy – The Buddy Holly Story have just got underway, and Showbiz General Manager, Craig Ogilvie, says it was important that the first production back after an unprecedented break from performing, was a ‘feel good’ show.

“A lot of thought went into what show was right for our return, and there was no doubt it had to be fun, full of well-known energetic songs and have broad appeal,” he says. “Buddy has all that in spades.”

Set in the 1950’s when Holly was the world’s top recording artist, the show features his greatest hits including Oh Boy, Rave On, Peggy Sue and That’ll Be The Day. Buddy – The Buddy Holly Story has been described as the world’s most successful rock ‘n’ roll musical” having been seen by more than 22 million people.

Showbiz is thrilled to have cast in the title role, 23-year-old Jake Byrom, a phenomenally talented performer who has recently returned from London.

“We are fortunate to have such outstanding talent available to us. In fact, the entire cast is terrific. As Showbiz audiences know, we consistently produce word-class productions and Buddy will be no different,” says Craig.

Jake returned to Aotearoa from a successful theatre career overseas early last year, as Covid travel restrictions were put in place. He had been starring in the UK as Barry Gibb in the hit show Saturday Night Fever, and was about to embark on an international tour when news hit of its cancellation due to the pandemic.

“Of course I was pretty devastated when we got the news but the freedom Kiwis have to go out, enjoy ourselves including going to the theatre, means this is definitely the place to be,” he says. “This is a dream role, one I have wanted to play for a long time, and I can’t wait to get started.”

Accomplished director and choreographer, Sara Brodie, has directed and choreographed more than 90 productions for companies including NZ Opera, Melbourne Festival, Chamber Music New Zealand and arts festivals across New Zealand. Her last production for Showbiz was Sister Act in 2017 and is loving being back working for Showbiz and going bac to the Isaac Theatre Royal.

“We are full steam ahead rock n rolling, bringing Buddy’s music to life with a multi-talented case,” she says. “The show is a celebration of the brilliance of an icon and an era. It is the perfect production for audiences wanting to feel goo and have a great time after a year of uncertainty around the world.” Sara advises, “bring your dancing shoes”.

Tickets are on sale now and Buddy – The Buddy Holly Story, opens at the Isaac Theatre Royal on September 22, two weeks after what would have been Holly’s 85th birthday. He died aged 22 in a plane crash that also took the life of Ritchie Valens and The Big Bopper.