Lincoln University today officially opened the first of two new science buildings, marking a significant milestone along a journey that began more than 10 years ago, following the 2010/2011 Canterbury earthquakes. 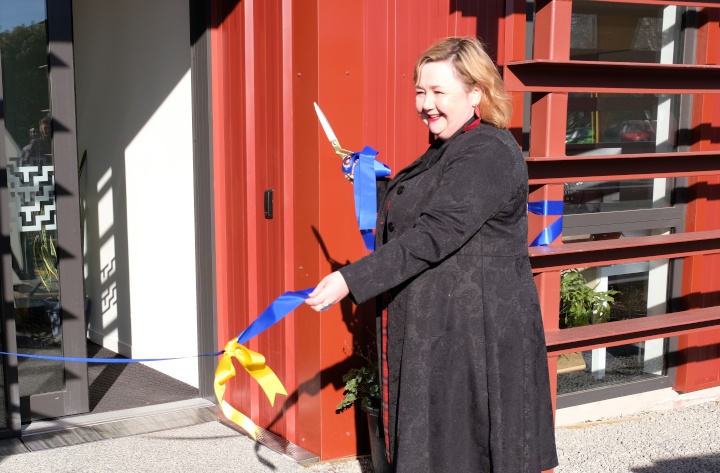 The Minister of Research, Science and Innovation Hon Dr Megan Woods performed the formalities at today’s event, cutting the ceremonial ribbon to officially open the building that will be home to over 50 staff and postgraduate students from Lincoln University’s Department of Agricultural Sciences, responsible for teaching and research in the animal sciences.

"Lincoln University has always been a chief driver of innovation in agriculture, particularly in the food and fibre sectors, and our new facilities will position us to take an even more prominent role in developing solutions for the most pressing challenges facing the land-based industries.

“Our university has been producing primary sector graduates for more than 140 years, and we remain dedicated to attracting and inspiring future generations of tauira; equipping them with the knowledge and skills needed to grow a better future.

“It’s appropriate and timely that we deliver a new cutting-edge science facility as a base where our people, including our world-leading researchers, can continue their critical contribution to shaping more prosperous and sustainable communities.”

Among the new building’s state-of-the-art facilities is a purpose-built gene marker laboratory where Professor Jon Hickford leads a team specialising in the molecular genetics of ruminants, working to identify genetically superior animals. Professor Hickford’s team is internationally recognised, and recently won the Science and Research Award at the 2021 Federated Farmers Primary Industries Awards.

Taking just 12 months to complete, the new agricultural sciences building began its construction phase in late June 2020 with a sod-turning ceremony conducted shortly after the COVID-19 lockdown was lifted.

The new building, constructed by Leighs Construction and designed by Sheppard and Rout, cuts a striking figure on the south-eastern corner of the Lincoln campus, with its brick-red, sun-louvred exterior and low-slung profile. It incorporates a mix of laboratories, offices, open plan workspaces, meeting and collaboration zones, all complemented by a comfortable and well-appointed staff kitchen and social area adjoined by an exterior private courtyard.

The roof-mounted solar array adds a further 60kWh to the University’s existing commercial-scale solar generating capacity, which now totals more than 522,000 kWh – enough to power 72.5 houses for a year.

Lincoln University remains the only New Zealand university to achieve a ranking on the UI Green Metric World University Rankings; currently ranked 51 out of 912 universities.

The new science facilities are part of a wider campus development programme for Lincoln University that has already seen the launch of a vibrant and bustling new student hub and an expansive new outdoor events space featuring native plantings and a cultural heritage-inspired paved pathway.

The recently redeveloped Whare Hākinakina Lincoln University Gym was officially opened by the Minister for Sport and Recreation Hon Grant Robertson at an unveiling event held on campus on 17 June. The new Gym is central to Lincoln University’s celebrated campus experience and offers students, staff and the wider community a comprehensive array of services and equipment to develop their fitness and nourish their physical and mental health.

Further campus projects including an ambitious and extensive decarbonisation programme which supports the University’s goal to be carbon neutral by 2030 and to cease the combustion of coal by 2024, the restoration of Ivey West and Memorial Hall and an overarching visionary landscaping masterplan, are in various stages of development.