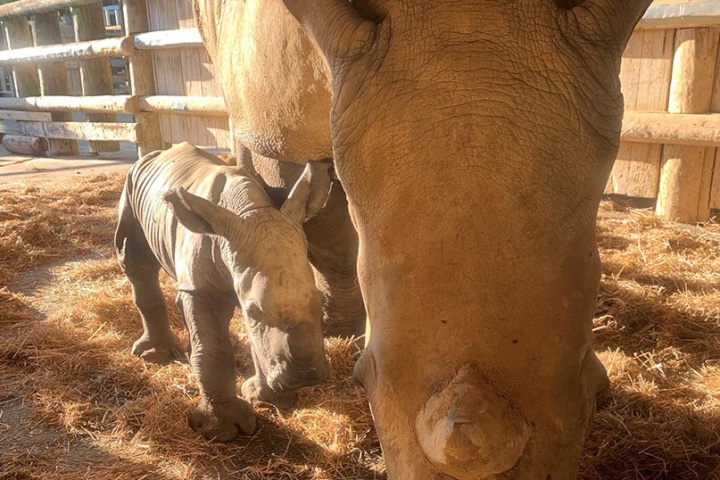 A southern white rhino has been born at Hamilton Zoo – meet Zahra!

The female calf arrived on 12 March 2020, following her mother’s 16-month pregnancy, bringing the number of white rhinos at the Zoo to six. Her name is Swahili in origin and means flower or beautiful.

Zahra is the fourth calf for mum Kito and joins father Kruger, brother Samburu and females Imani and Moesha at the Zoo.

The calf was born with the skin condition Epidermolysis bullosa. Hamilton Zoo Curator Cheridan Mathers says this is a rare genetic condition that presents as lesions on the skin and is something she will have throughout her life.

“Visitors may notice lesions on her legs and under her chin. Though the lesions can look unsightly, her behaviour tells us that these are not affecting her in any adverse way. She’s still bright and bubbly, bouncing around, feeding from Mum and exploring her environment.”

Zahra is being closely monitored by the keeping staff and vet team in accordance with the Zoo’s high animal welfare standards. “The lesions are reducing and improving daily, which is encouraging,” says Ms Mathers.

The announcement of the new baby was delayed while the vet team and keepers assessed Zahra’s condition. The decision was taken to confirm the preliminary diagnosis through testing, but the onset of COVID-19 unfortunately delayed this process.

Hamilton Zoo has had great success with its breeding programme for southern white rhinos, with eight born at the Zoo.

Males Kifaru and Ubuntu were transferred to The National Zoo and Aquarium in Canberra. Inkosi and Mtoto are now at Auckland Zoo along with female Jamila, who was transferred in 2018 and is herself due to give birth later this year.

Named for the Afrikaans word “weit”, which means wide, referring to the animal’s wide mouth, the southern white rhino was thought to be extinct in the late nineteenth century. However, in 1895 a small population of fewer than 100 individuals were discovered in Kwazulu-Natal, South Africa.

Today, after 121 years of successful protection and management, the International Union for Conservation of Nature (IUCN) has classified the southern white rhino as “near threatened” in the wild.

Although still hunted and poached for their horns, which are believed in some cultures to have medicinal qualities, about 20,000 animals exist in protected areas and private game reserves.

Baby Zahra will be on display to the public from today, Friday 15 May.