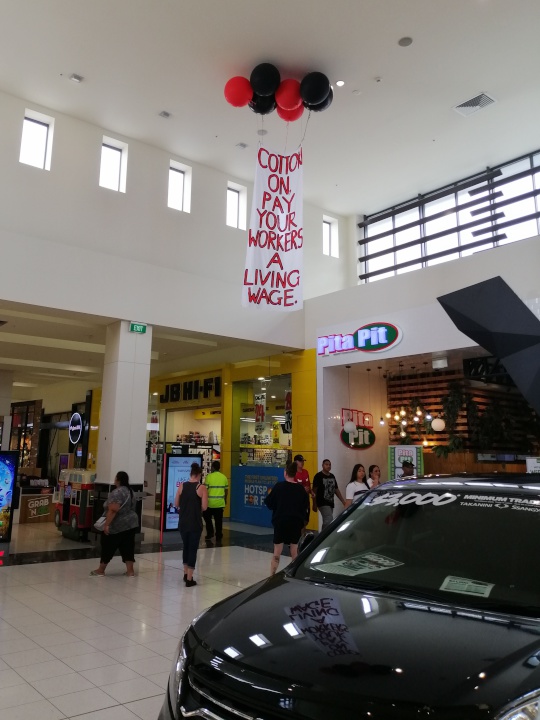 A large banner calling for workers to be paid a living wage was unfurled in Manukau Westfield Shopping Centre today, as multinational fast fashion chain Cotton On continues its refusal to negotiate with union members, despite ongoing strike action across the country and four months of its corporate managers blocking ordinary wage bargaining with workers, FIRST Union said today.

"Our members at Cotton On have felt the full range of emotions over the last four months - initial enthusiasm for the company’s promises and claims, disappointment at their failure to live up to them, growing despair at their low pay packets and now frustration that Cotton On won’t even sit down to bargain for fair wages," said Tali Williams, FIRST Union Secretary for Retail, Finance and Commerce.

"Retail workers have worn t-shirts calling for a living wage and demonstrated outside the company’s busiest stores, and distribution centre staff have carried out full withdrawals of labour that have significantly impacted their ability to supply goods - and that’s after exhausting every cooperative avenue we could beforehand."

"By now, workers have gotten the message loud and clear that Cotton On place more importance on telling the world how ethical and responsible they are instead of actually doing anything to live up to those values in terms of how they treat their staff."

"Let’s be clear - Cotton On are the largest global retailer in Australia, and they turned over more than $2 billion AUD in the last financial year. They have a workforce of 22,000 people across 18 countries, and every day they choose not to pay them a fair wage."

"Not only are they dodging ordinary bargaining sessions that unions have with every employer, but they’re also attempting to drive wages down to the point that new arrivals at their stores would be paid minimum wage - it’s a backward move, and it relies on their silence."

"Meanwhile, the workers who actually run their business and look after their customers are struggling to survive and being treated as disposably by Cotton On as the fast fashion they’re selling."

"While the company continues to block its workers from even discussing a living wage, it’s looking more and more likely that strike action will escalate over the coming year as increasing numbers of Cotton On staff join the union and prepare to fight for fair pay."

-An image of the banner is attached as displayed in Manukau Westfield Shopping Centre and may be printed, published or reproduced in any medium. For more images in high resolution, click HERE, HERE and HERE.